Oh what a lovely war on terror: Product @arcolatheatre 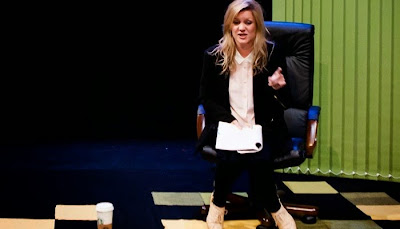 One of the lasting memories about watching the 9/11 terrorist attacks unfold live on television was wondering what would happen next. There was the first tower, then the second, then the Pentagon, and then somewhere in middle America. A few weeks later there would be the anthrax scare, the need to be alert but not alarmed, and to buy up duct tape.

In the immediate post 9/11 period there was so much paranoia about how clever and evil the perpetrators of this terrorist attack were, that anything next was possible.

Product, currently playing at the Arcola Theatre, is Mark Ravenhill's monologue about the pitching of a dubious script. It brings back the memories of the worst of this post 9/11 paranoia.


The entire piece takes place in a clean and sterile office that no doubt is home to some minor studio. Carpet tiles are on the floor, vertical drapes behind. And seated on a chair, Olivia Poulet is pitching the script, Mohamed and Me, to a famous actress. It’s the preposterous story about a 9/11 widow who falls in love with a suicide bomber.

Bit by bit the piece takes apart the media response to 9/11 and the insincerity of the Hollywood machine. Everything is black and white, full of over-plotted intrigue, sex and violence.

There is also product placement (“we’ve got Gucci onboard”), generous amounts of ignorance and sexism thrown in for good measure.

It’s embarrassing to watch, but only because it evokes the crazy post 9/11 period. And in this production with Olivia Poulet, even the most cringe worthy statements come across as fascinating insights.

Her performance is constantly varied, and with impeccable comic timing she keeps things briskly moving along from desperation to the downright hilarious.

Its a funny fifty minutes, and a great performance to see. Product runs at the Arcola through to 23 May.

listen to ‘Pitching boom: First impressions of #Product from @InsideIntelligence @arcolatheatre with @johnnyfoxlondon’ on audioBoom