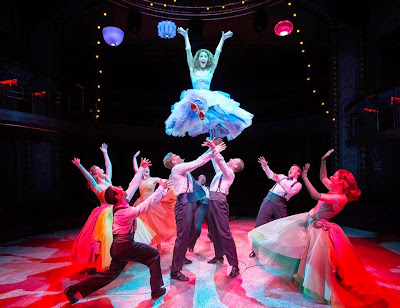 An ingenious staging in the round and some rousing numbers (in the second half) may still have you wondering about the point of this revival of High Society at the Old Vic Theatre, a show that was probably best left on film rather than attempting to transfer it to a staged musical.

The production is quite marvellous to look at. Things just pop up from the floor - stages, tables with umbrellas, second pianos. There is even some on-stage cooking of breakfast and as someone who loves the smell of eggs and bacon cooking in the morning (although it could have been pancakes - I wasn’t sitting close enough), it was pure bliss.

But by casting actors who are not the best singers, the shine seems to be missing in this frothy, superfluous musical, giving it a grittier feel that does not quite sit with it’s farcical and escapist plot.


Based on the film, which in turn was based on the play (which was also a film with Katherine Hepburn and Carey Grant), The Philadelphia Story, the piece is about wealthy bride-to-be Tracy Lord, who is about to get married for the second time.

Her ex husband is still around and with a tabloid reporter in tow, everyone seems to be in love with Tracy and it is not clear who is going to end up marrying her. Naturally it all works out in the end.

Kate Fleetwood seemed more Katherine Hepburn in her character… And in her singing). She has some wonderful comic timing but you’re not quite convinced of the emotion and (melo)drama that the piece calls for when she breaks out in song.

To keep things bright and perky however there is a bouncy warm up act in the form of Joe Stilgoe at the piano who calls out for audience suggestions for an unlikely piano music mash-up.

There is also a high kicking, piano duelling, double-bass pumping rendition of Lets Misbehave which has the audience cheering and the spectacle and relentlessness of it.

But all told it still feels like a musical based on a film that has had a few numbers added to it from the Porter back-catalogue for some extra padding.

There has been much talk about how Kevin Spacey opened his season with The Philadelphia Story and closed it with High Society. It might have been more interesting to close it with a musical version of Cloaca...

High Society runs through to August at the Old Vic.