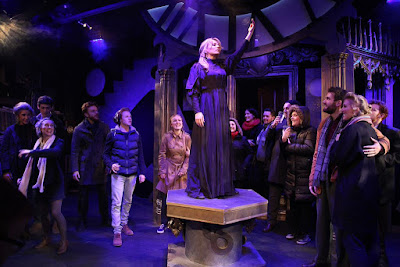 The Clockmaker’s Daughter is an exciting new piece of musical theatre, full of promise and some terrific music. It has landed at the Landor Theatre and with its charm, strong performances and production values, it will no doubt keep enthralling audiences.

What is most intriguing is how this original work by Michael Webborn and Daniel Finn, appears so fully formed and seemingly ready to move on to bigger or better things after the London fringe.


The piece is an original story and music set in the fictional Irish town of Spindlewood. In the present-day Spindlewood there is a tradition of ‘The Turning of the Key’ each year on the last night of winter. And so begins the story of the origins of this tradition.

The local town clockmaker (played by Lawrence Carmichael) is struck with grief after the loss of his wife. So he creates a mechanical version of her using the parts in his workshop. But with a bit of magic she becomes more real than he ever would imagine. He calls her Constance and begins to teach her about the world. 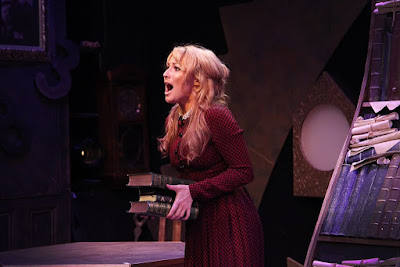 But as Constance learns more, she wants to go to the outside world, and while the clockmaker is away she seizes the opportunity. She soon finds herself wanting to please and help people and winning over the hearts of the local townspeople. Well, most of the townspeople. After proving she can sew and make a dress better than the local dressmakers she starts to unwittingly make a few enemies, which is only made worse when Constance falls in love with the dressmaker’s son, Will.

It is a new take on the genre of fairy tales that is built around prejudice, discrimination and fear of the unknown. So perhaps even with its eighteenth century setting it feels quite modern for these times about endless debates around immigration, low productivity and better skilled workers (Constance could knock out a dress in half the time the local workforce could so no wonder she wasn't that popular).

The music is fusion of musical theatre styles and Irish music and  performed particularly well by the large cast assembled of this work.

And while the piece feels like an almost fully fledged piece of musical theatre, that is not to say it could do with a bit more development. Constance’s relationship with her “maker” wavers between the fatherly to the creepy, and more could be made of the friendship with local townswoman Amelia. It could also do with the removal of a few superfluous scenes in the first half.

Nevertheless it is an impressive achievement and yet another fine production from the Landor Theatre. And the company pointed out on twitter yet another benefit of seeing the show...

@NewtonFaulkner We'd love to see you at the show if you have the time. We've at least one reason why you should... pic.twitter.com/xV14XYT3Me
— Clockmakers Daughter (@ClockMusical) June 7, 2015


It runs until 4 July. Go see it even if you're not mad about gingers...