Monkey business and other catastrophes: The Dead Monkey @ParkTheatre @Mongrelthumb 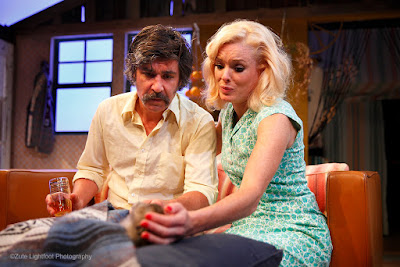 The sphincter of modern life as viewed from a grimy, and gritty (well they live by the beach so sand in the house must be hell) American marriage is both absurd and fascinating in Mongrel Thumb’s production of The Dead Monkey.

From the minute you enter the smaller space of the Park Theatre it is as if you are transported to California where the sun, sand and surf are so enticing that people just drop out of life. Sure you may be living in poverty but what a lifestyle with linoleum floors, distressed furniture, an endless supply of oranges. But it is all incredibly evocative and alluring. 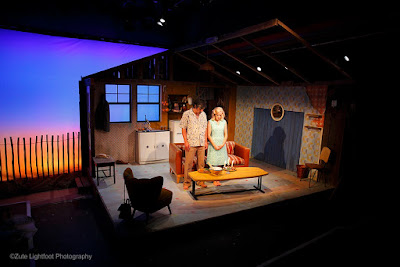 It is this lifestyle that is where Hank and Dolores come from. But all is not well. The play opens with a vet standing over a dead monkey. Their pet monkey. He died from old age. And that is just the start of their problems.

As the play unfolds it becomes apparent that this layabout lifestyle has taken its toll on more than just the monkey. After fifteen years of surfing and monkeying around, this marriage is on the brink. 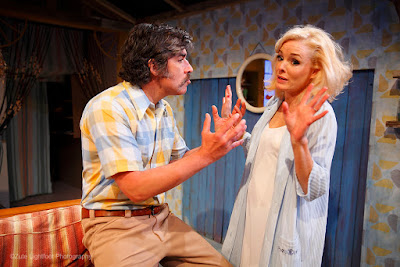 The piece is both hilarious and dark. It varies between the two so much that you are not really shocked about how things pan out.

Nick Darke’s play is so layered with meaning and witty observations you could have endless conversations about the piece long after the show. Lost youth, pets as an excuse to perpetuate an exhausted relationship, dirty bare feet (actually that’s probably more to do with dust from the set); there are so many different meanings to this piece. 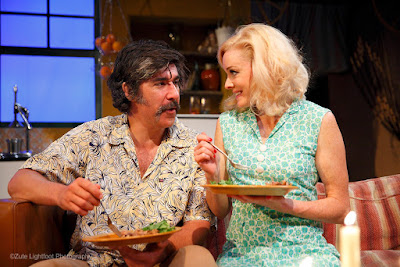 Central to the success of the piece are the terrific performances by the two leads. Ruth Gibson plays Dolores, a lady who has a natural gift for dealing with animals. She transforms from what at first appears to be a ditsy blonde to a resourceful yet trapped person. There is a scene in the second half of the piece where she returns after confronting a friend and you realise that she is cunning, but not clever enough to move out of a doomed relationship.

James Lance with his little pot belly, overgrown moustache and not very successful job as a salesman “gunning down the highway” selling crap, strikes you at first as mostly harmless. But the cleverness in his transformation is how by the second half of the show that this dopey demeanour hides a bitterness and resentment about what he has become over time.

The Dead Monkey is writer Nick Darke’s most famous play, and this production comes ten years after his death, and almost thirty years since it was first performed by the RSC at the Barbican. Time seems to have made it as relevant as ever.

Yet another classy production from Mongrel Thumb, directed by Hannah Price. And anything with a monkey in the show gets me into it... It runs through to 4 July. Don’t miss it. 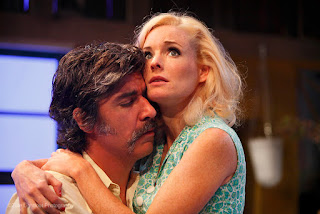