Party time: I Went To A Fabulous Party @kingsheadthtr @fabpartyplay 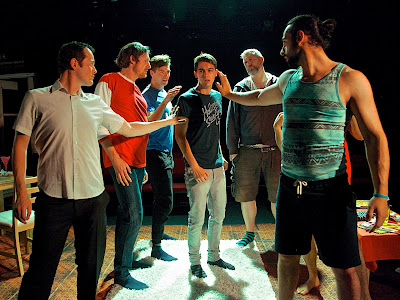 I Went to a Fabulous Party by debut writer And Davies is currently showing at the Kings Head Theatre. Its a play that leaves nothing much to the imagination.

Under the guise of a party at a successfully married couple's place, a range of gay stereotypes is summoned to liven things up. There is the gym bunny, the nerd, the bear, the jock and the chicken.

Anyway, after a few throwaway lines about it being too darn hot or wanting to show something for the cammers, suddenly half the cast are naked.

There is so much relentless full frontal nudity in the show that perhaps some of the characters should walk on naked and then proceed to get dressed just to be a bit different. 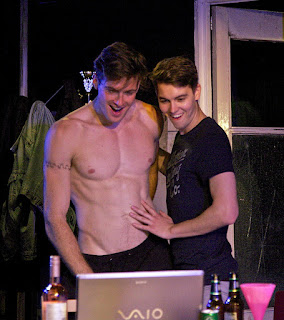 The piece briefly explores the superficiality of the gay world and the need to be true to yourself, but what really comes across most is how dire gay parties can be.

Nevertheless the piece really does not  take itself too seriously. First time writer Davies manages to include enough bitchy banter to sustain the piece for its one hour duration.

There is also constant interaction with the audience including a bit of participation for anyone game enough and with a burning desire to get dressed up in a fireman's outfit.

No doubt its late night slot in Edinburgh will serve it better than the early evening slot at the Kings Head, when its audience will have the benefit of having a few drinks under its belt and feeling less inhibited.

Still, it's mostly harmless and mercifully brief. And at least the actors are getting paid for their bravery.

I Went To A Fabulous Party is directed by Dan Phillips and runs at the Kings Head Theatre until 5 July and then is off to Edinburgh in August.