Straight up circus and jazz: Scotch and Soda @LdnWonderground 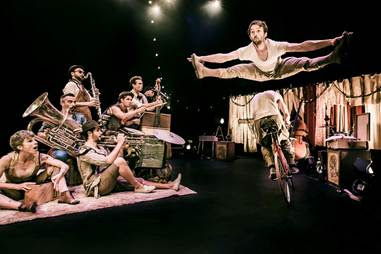 Spade guitars, feats with champagne bottles you didn’t think were possible, dancing budgies and amazing acrobats. It’s all part of the mix with the latest offering from Company2, Scotch and Soda, now playing at the London Wonderground on the SouthBank.

The show is a mix of circus and jazz provided by The Crusty Suitcase Band, led by by Ben Walsh, who keeps things moving with an impressive collection of percussion devices instruments.


Upon arriving at the Spiegeltent, the musicians are on stage playing what appears to be a game of cards. One of the circus performers is wandering about shouting out something or other and there is a good deal of people spotting going on in between making sure you have the best seats and vantage point for the action. As the noise dies down the band really gets going and the show kicks into gear and does not let up for the next seventy or so minutes. 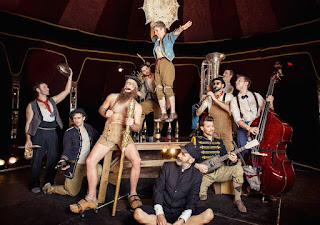 Music dance acrobats and performance merge into an array of different acts that are varied and thrilling enough to keep you entertained throughout.

If you saw David Carberry and Chelsea McGuffin’s previous circus outing Cantina, which was a slick and sexy blend of circus performance, dance and music you will know what to expect. And while the hint of sophisticated sadomasochism that permeated Cantina is not there, you have in its place an energetic beatnik vibe and some thrilling acrobatic performances.

There is also a bit of full frontal male nudity that had the ladies around me nearly falling off their seats. It is fair to say that the performer in question has a fair bit to offer.

An evening that you won’t forget, and going by the audience reaction it looks like to be another hit on the Southbank. It runs until the end of September. Don’t miss it.

scotch and soda promo from Company 2 on Vimeo.