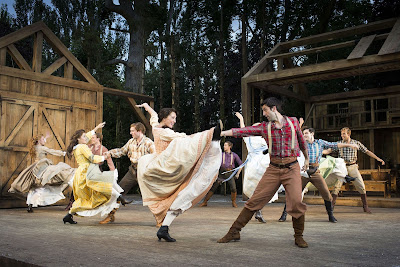 The show was first a movie musical starring Howard Keel and Jane Powell with music by Gene de Paul and lyrics by Johnny Mercer in the 1950s. In the 1980s it was updated with additional music and lyrics by Al Kasha and Joel Hirschhorn. In this evolution from movie musical to stage musical the production makes a little bit more about the time and place. 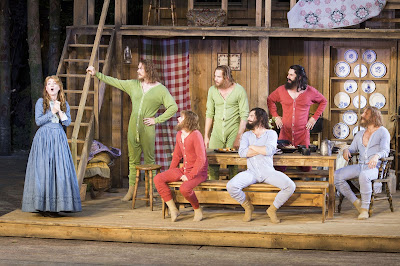 Holding it together is a strong central performance from Laura Pitt-Pullford as Milly. She is not someone simply swept off her feed by the gruff and moderately rough-looking Gaumond. Here she is making some practical compromises. You are left without any doubts that her efforts to get the brothers ready to go courting’ with the local ladies is part of a grand plan to get them out of her life.

Alex Gaumond is a revelation as Adam. Apart from his soaring vocals and dashing looks, his on-stage chemistry with Pitt-Pullford gives the show much of its humour and warmth. And his characterisation does not make him a complete brute. When he sings “A woman ought to know her place” in the second half it comes across as a cry for help rather than a statement of fact. 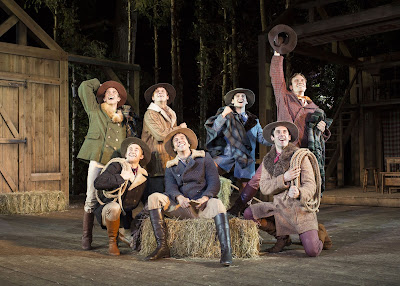 The rest of the cast are terrific and surely must be showing off some of the best dancing to be seen in a musical at the moment. Of course the choice to cast dancers with ballet experience and give the choreography a balletic feel means that the transformation from scruffy woodsman to dashing suitors had some in the audience commenting at interval that Millie had turned them gay. The last production that was near London avoided similar comparisons by flashing a lot more flesh. But in the open air it is probably way too chilly for that sort of thing.

Anyway it’s a simple, raw looking production (so raw you can smell the cut wood when you enter).  It is particularly well suited for Regents Park Open Air Theatre. As the sun sets and the lights get dimmer there was definitely a magical feel as if we were all camped out in Oregon. It was hard at times to pay attention to everything going on in the show rather than just stare in wonder at how beautiful it all looked.

First impressions with @johnnyfoxlondon follow. The context of the discussion focuses on how Gaumond’s opening line about the "going price for beaver" took on various meanings given he was looking for a wife as well as trying to sell what he had trapped...

If you can't make it, there is also a new recording of songs from Seven Brides for Seven Brothers by JAY Productions Ltd. The recording features cast members Laura Pitt-Pulford, Alex Gaumond and Sam O'Rourke performing the songs.