The prince of tides: The Man Who Had All The Luck @KingsHeadThtr 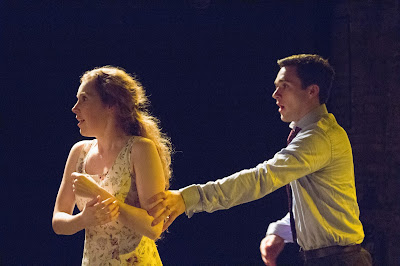 As we approach the centenary of his birth, Arthur Miller’s first produced play gets a classy revival with a terrific cast at the Kings Head Theatre.

The premise of the work is that David, a mid western automobile mechanic has the Midas touch. Everything he touches turns to gold. He gets the girl he wants (against her father’s wishes), he runs a successful automobile mechanic business (after a chance encounter with another mechanic). He even opens a gas station which just by luck then has a freeway run past it. But as his family and friends struggle with their lives despite their hard work and perseverance, David struggles to enjoy his success. And as he waits for his luck to turn he slowly descends into madness. 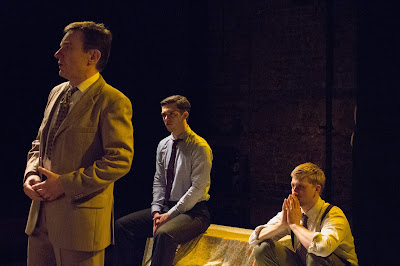 A recurring line throughout the piece is that David’s success is just good luck and like the jellyfish he should just go where the tide takes him since at any point, like a jellyfish, he will be all washed up.

This production has assembled a terrific cast to tell the tale. As the young David, Jamie Chandler gives the character the determination and vulnerability to be credible as the man with the Midas touch. As his less-successful brother Amos, Michael Kinsey is terrific and heartbreaking towards the end of the second act when everything he has lived for as come to nothing.

Chloe Walshe as Hester, David’s wife, the sole female character in the piece holds her own amongst all the men folk.

Special mention also has to go to Peter Dineen who plays a variety of different characters that each have a significant impact on David’s life. As Hester’s father he has the audience on edge as he delivers a damning assessment of David’s character. It is also a clever device that has the audience thinking our hero is not much of a man. 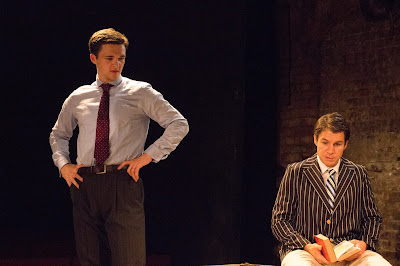 When the piece premiered in 1944, it ran for only four performances and was largely forgotten. But many of the themes that Miller would explore in later works about America and freedom are there.

The piece does lose its way in the final act as it attempts (spoiler alert) to cram in madness, disaster and an illicit love affair into the closing twenty minutes. But even so, it is a terrific journey up to then. And it all ends well.. Of sorts…

Having seen many gay themed plays at the Kings Head recently, this one feels more testosterone charged than anything else produced there of late. And while cheap laughs and nudity is fine, it is also a refreshing reminder that good writing and a great cast always make for a great night out at the theatre.

Produced by End of Moving Walkway and from The Kings Head, which is one of the few small-scale unfunded theatres in the UK to pay its actors and stage managers an Equity approved rate for rehearsals and performances.

The Man Who Had All the Luck runs until 26 September. For now…