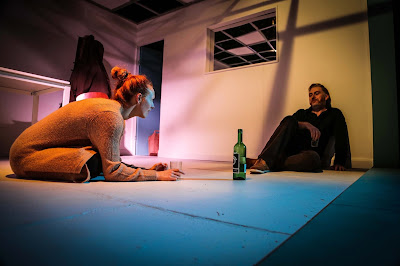 The second of the joint of the joint winners of the inaugural Theatre 503 Play writing Award, Valhalla,   is an intriguing and at times frightening tale on science, mythology and a marriage on the edge.

This two-hander starts off seemingly normal. Man, a genetic scientist is researching a cure for an epidemic killing thousands. His wife, Woman, is a GP. They are trying for a baby and she is having trouble conceiving. Chaos and rioting has erupted on the streets arising from the epidemic, so they head to a Nordic research facility so he can continue his work.


But alone with each other, their research, and possible neighbours and bad memories, it quickly becomes apparent that all is not right with their marriage. Soon we are looking at the ethics of genetic research, fertility and the endurance of human love.

The genius in this play is that it is constantly shifting, throwing you off balance about what you are seeing and the relationship between the couple. Perhaps there is a little too much teasing for the end result, but the piece is nevertheless fascinating and constantly demands your attention.

The chemistry between the two actors is important and Paul Murphy and Carolina Main as “Man” and Woman” deliver compelling and unnerving performances.

Main has recently appeared in Grantchester for ITV as well as King Lear for the RSC and The Winter’s Tale and All’s Well That Ends Well for the Cambridge Shakespeare Festival.  Paul Murphy has recently been in the Merchant of Venice at Greenwich Theatre and The Emperor Jones at the National Theatre.

Valhalla is produced in association with Sheer Drop Theatre and has been generously supported by Arts Council England, Cockayne - Grants for the Arts, The London Community Foundation and The Richard Carne Trust. It’s an ambitious new piece of writing by Paul Murphy and running through to 24 October.