Try to say no to this: In The Heights @Intheheightsldn 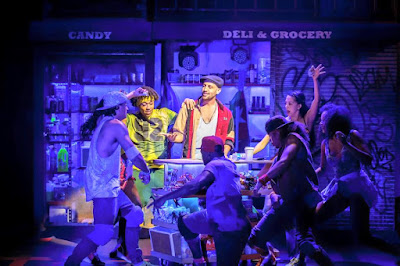 It's been over a year since In The Heights stormed London. It is back at the Kings Cross Theatre sounding even better than before.

This is a thrilling show directed by Luke Sheppard. It's full of terrific performances, spectacular choreography by Drew McOnie and a pulsating latin, pop and hip-hop-fused musical score by Lin-Manuel Miranda.
With a book by Quiara Alegría Hudes, it is a slice of life from Washington Heights New York during one hot summer. The neighbourhood is changing with rents going up and people moving out. Yet there is hope and someone in the neighbourhood has won the lottery.

It's interesting that in this show yet again finds itself playing in a neighbourhood of significant change (Kings Cross). And as for Washington Heights, in the years since it was written the future of corner stores that feature in the show are even bleaker.

But despite the reality there is so much fun to be had in this piece. It will have you grooving along in your seat or wanting to get up and dance with the cast.

Miranda, who is taking the musical theatre world by storm again with his period musical Hamilton talks about In The Heights in this recent New York Times podcast. He describes how hip hop, musical theatre and the muppets were among the sounds he grew up with... Something we can all relate to...

In The Heights is sharing the Kings Cross Theatre with the Railway Children and so there are some nice touches with the railway station entrance covered in graffiti and New York Subway signs (which no doubt will be removed so they don't confuse the children too much). It is running through to January. Worth catching more than once.