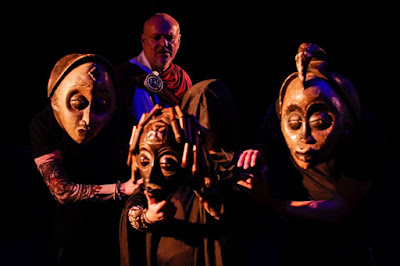 Shakespeare’s gory Elizabethan shocker Titus Andronicus is less a tragedy than a blood soaked exercise in revenge. But it is given a slick (and slightly gory) updating by Arrows and Traps in this production currently playing at the New Wimbledon Theatre studio space.

Heads in plastic bags, severed hands, twitter-based uprisings  combine in this production that borrows from a range of current trends to tell this tale of horror and revenge.

But the cast assembled mostly keep the focus on the story for a brisk two hours, keeping a fine balance between the comic, creepy and sadistic elements at the heart of the story.


The piece tells the story about the return to Rome of Titus Andronicus as a war hero. But in his absence power struggles, scandal and intrigue have made it a dangerous place for him and his family. Soon members of the Andronicus family are raped, murdered and mutilated. For Titus it comes a battle fight for his legacy and exact revenge before everything is lost.

Unlike other Shakespearean stories, Titus is a fictional character that draws on various legends. It is largely assumed to be written by Shakespeare in collaboration with others. While popular in its day it fell from favour in subsequent centuries. No doubt the comic elements and treatment of rape and murders probably proved a little distasteful. Only in the second half of the twentieth century did its reputation recover.

Perhaps with the ability to draw parallels to violence and inhumanity to current violent events makes the piece seem more relevant than ever. The anachronistic references further suggesting that not much has changed since the Roman times (even if they are fictitious Roman times).

Arrows and Traps is supported by patrons Gyles Brandreth & David Bedella, and have some inspired ideas for presenting adaptations of the Bard’s work on the Off West End stage.

It runs at the New Wimbledon Theatre Sudio through to November 14.