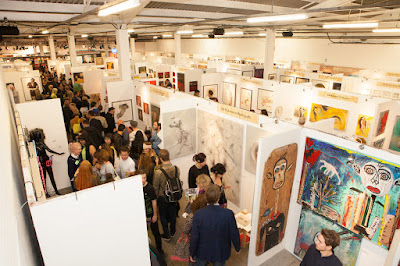 Non Zero One are presenting a work at The Other Art Fair from 15th – 18th October.  They will be performing  Untitled (audio with pen) which is an audio-based piece.

Participants are told nothing of what they are going to do. Instead are asked when queuing for the fair whether they are curious...

They are then drawn slowly in, until it is too late to turn back, having to continually question how far they want to involve themselves and being encouraged to go beyond the traditional weird stuff set for both theatre and art fairs.


Anyway the Other Art Fair is celebrating its tenth edition this year and it will also be welcoming back Tracey Emin as a guest artist. Emin International will be launching two new limited edition prints (50 each) along with an exclusive poster (500 of them) available for £50, offering anyone the chance to own something and get it hand signed by the artist. One suspects crowd control and mass hysteria might also be part of the artistic experience there.

There will be 130 artists from around the world represented at the fair and it runs from 15-18 October at the Old Truman Brewery.