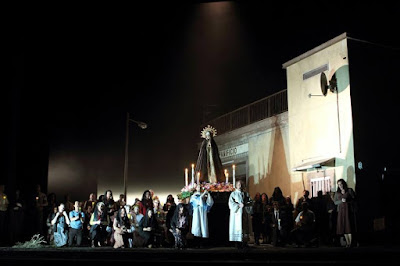 Things take a gritty and violent turn in the Royal Opera's new production of  the short operas Cavalleria Rusticana and Pagliacci.
With its sumptuous music and a production that moves the action to recent times, the melodrama and violence seem so palpable. 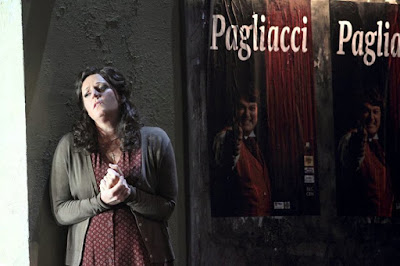 Cavalleria Rusticana never lets up with its fast-paced plot set over Easter Sunday in a small Sicilian village. Turiddu returns from military service  only to find his true love Lola has married the local powerful man, Alfio, while he was away. He seduces local girl Santuzza but abandons her when he starts to have an illicit affair with Lola. Santuzza then has to decide how to reclaim her future.


The ladies stand out in these pieces. Eva-Maria Westbroek as Santuzza gives this piece a dramatic fire with her intense and rich portrayal of a woman scorned. She is no match for the light and playful Lola (played by Martina Belli). The production underscores her plight during the Easter Procession where the Virgin Mary comes to life and points at her as the condemned woman.  Elena Zilio as Turiddu's mother Lucia also has a standout performance as a woman resigned to her fate. 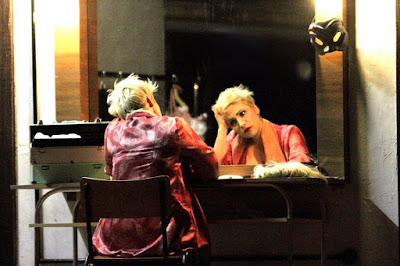 Meanwhile in Pagliacci, the story unfolds at a slower pace. The contrast with what has gone before makes it less satisfying... Until all the elements come together for its thrilling (albeit gruesome) climax. The story revolves around actor Canio, who discovers his wife Nedda has been unfaithful. And they are about to enact a comic play about a silly man who is married to an adulteress. Despite high emotions, the show must go on.
Carmen Giannattasio as Nedda captures her fiestiness and her contradictions. Doubling for both performances, Aleksandrs Antonenko as Turriddu and as Canio gives a dark interpretation of these men. Dimitri Platanias as Alfio and as Tonio also provides malevolence with his rich baritone.
With large forces summoned, the orchestra under conductor Antonio Pappano sounds lush and dramatic. The other star of the evening is the Royal Opera Chorus. Both works have significant choral scenes that underscore the drama. A particular highlight being the Easter Hymn in Cavalleria Rusticana. 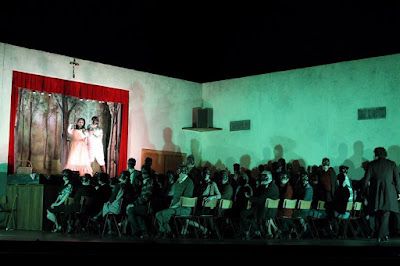 Director Damiano Michieletto and set designer Paolo Fantin, who received mixed reviews with their first Royal Opera show Guillaume Tell, still received a few jeers  on opening night. But drowning out the purists (or should that be Puritans?) were cheers throughout the house. It was well deserved given the thoughtful update that underscored the drama, without being a distraction.
Cavalleria Rusticana and Pagliacci run through to 1 January. On 10 December it will be broadcast in cinemas and on 6 February 2016 it will be broadcast on BBC radio 3.
Photo credits: Production photos by Catherine Ashmore