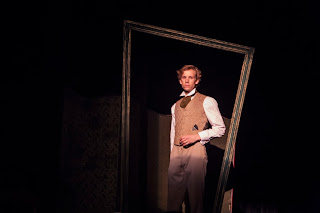 
It is perplexing that more was not made of the the added homoeroticism. There are no kisses, no sexual liaisons. It all talk and no show in this passionless production, despite the dialogue suggesting otherwise.

Guy Warren-Thomas as Dorian with his sharp and delicate features makes a fine Dorian, but the remaining three performers seem miscast. They also have the thankless task of playing over twenty roles and dragging a few pieces of furniture about the set.

If it is an economic necessity to have four cast members, it would be better to remove some of the superfluous roles so that the differentiation between characters did not have to rely on the type of hat or gloves the actor is wearing. Future shows that reduce casts should also seriously look at equal gender casting so we don't have to have suffer male actors playing pantomime dames in drama pieces.

Downstairs at the Trafalgar Studios is a great intimate space and at times it feels like they are acting in your lap. But with its short scenes and huge cast, perhaps this is a piece that might play better as a television movie... It is a pity that it has not been adapted to better suit its current space (and its economic confines).

The Picture of Dorian Grey is at Trafalgar Studios until 13 February.