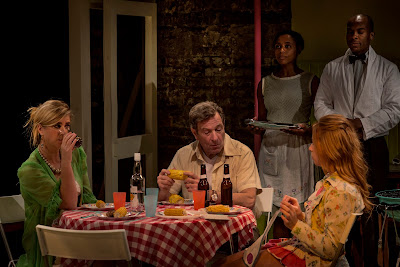 The Long Road South at the Kings Head Theatre takes the period of the 1965 civil rights marches and distills it into a small character study. But the pleasure from this piece is in its humour and strong performances.

Not much is happening in the summer of 1965 in Indiana. It is hot and the house of the Price family needs looking after. And over the course of the next ninety minutes, it becomes clear that it is not just the hedges and the grass that need trimming. 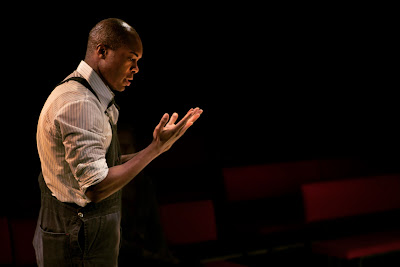 Grace and Andre are two domestic workers intending to collect their wages and head south to join the civil rights marches. But each member of the Price family conspire to keep them from leaving. Yet for all their platitudes about how important they are to their family, they are never shy at pointing out that in the end they are still just the help.

Lydea Perkins as Ivy is delightfully annoying as the teenager with a wild imagination. She tries to manipulate Andre into staying. At first she flirts; showing her body off, leaving her shirt unbuttoned. And when that fails she threatens to blackmail him and tell her father that he seduced her.

Cornelius Macarthy as Andre has to navigate the between being Ivy's noble mentor and his violent past. But he also has to contend with his new partner Grace (played by Krissi Bohn). She has less patience for his softly-softly approach to getting their back wages.

Imogen Stubbs plays the housewife Carol. She wanders about looking sexy in a lime green negligee, clutching a bottle and a few secrets. Michael Brandon is Jake the father with a simmering rage and at the mercy of his manipulative daughter.

The speed in which the characters are set up, and the scenarios they are placed in could have allowed for a much longer piece. But writer Paul Minx covers the plight of black workers (and their indifferent white employers) well. In the programme notes he mentions a handyman who worked for his father and talked about the civil rights movement inspired him to write the piece. Here he unpacks what might have been...

A great little production from the So & So Arts Club, directed by its founder Sarah Berger. Keep an eye out for what they do next. In the meantime The Long Road South runs at the Kings Head Theatre through to 30 January.