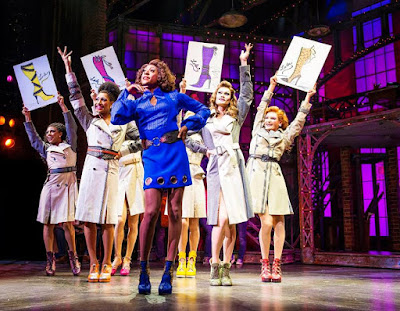 However the story is a bit predicable. It derives its formula plot from the film of the same name. But thankfully as an added addition are a collection of songs written by Cindy Lauper that range from folk, pop and disco. On top of this are some very impressive (albeit kinky) boots.
Set in a shoe factory in Northampton, father hopes to give his shoe factory over to his son Charlie, but he would rather go to London and do marketing. But when his father unexpectedly dies, Charlie finds himself running a shoe factory that has been losing money for years.

A chance encounter in London with a drag queen named Lola gives him the idea to tap the the niche market of men who like to wear high heels. Cue drag queens descending on Northampton to put a bit a glamour in their lives (and into the dreary shoe factory set).

There are some strong performances from the cast. Matt Henry as Lola steals the show (and gets the best numbers) as the drag queen with a heart of gold, and an eye for designing sex in heels. Killian Donnelly as Charlie gets to sing some soaring ballads although has the thankless task of navigating a rather vague character that has to be slightly bossy yet ultimately lovely.

Amy Lennox as Lauren, who gives Charlie the idea to find a niche, is a hoot as the factory girl falling for the boss.

There is little subtlety in this piece. People averse to musicals should be wary as characters burst into song for no real reason.

But in the end the boots do look pretty good. Albeit some wear it better than others...


Kinky Boots is playing at the Adelphi Theatre in London.