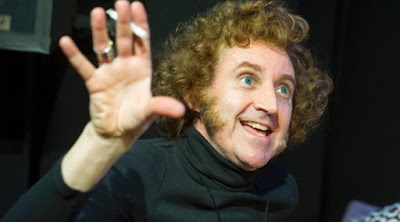 Life is a series of bedroom scenes in this tribute to comedian Marty Feldman, Jeepers Creepers. It's playing downstairs at the Leicester Square Theatre through to 20 February.

And while you learn a bit about the man from East London who found fame in Hollywood, you never really understand what made him so funny in the first place.


Feldman was part of the troupe of British comedians who drank hard, played hard and wrote some memorable comedy in the 1960s and 1970s. Although you might have trouble understanding this in this mostly serious account of three parts of his life.

His big break was playing Igor (that's pronounced EYE-gor) in Young Frankenstein. This piece opens with him in a hotel room with his wife as the movie has premiered and he is on the brink of stardom.

It flashes forward a few years when his career has peaked, he managed to direct a film and spends most of his time chasing starlets and drinking. The piece flashes forward to 1982 when he is in a third rate hotel room in Mexico City having been fired from the film Yellowbeard.

As Feldman, David Boyle doesn't quite look like him (he looks a bit more like Gene Wilder), but he does imbue him with some of his mannerisms. But for a man who died at the age of 48 of a heart attack you don't ever get a sense of a man living hard and on the brink of collapse.

And as his pushy and long-suffering wife, Rebecca Vaughan doesn't get much to do other than sit in bed and look suffering.

The piece has some comedic moments, although only a few audience members found funny. This included the recreation of the not dead scene from Young Frankenstein at the opening of the piece. Or when stumbling in late from a night of drinking and with another woman his wife asks, "What time of night do you call this?" An inebriated Feldman replies, "Ethel?". Cue hysterical laughing from two people in the audience...

But perhaps fitting for the life of man who had a career that was full of promise never realised, this piece squanders much of it.