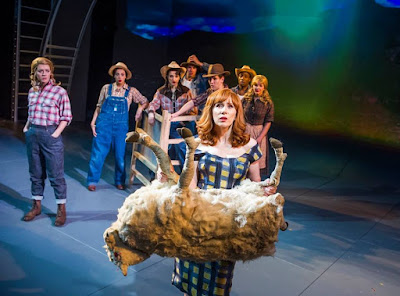 A starry cast and some wonderful production values make Miss Atomic Bomb a bit of a treat. It's currently playing for a limited run at the St James Theatre.

There is comedy... A bit of drama... Then more comedy and the occasional dropping of a bomb in this piece that focuses on the nuclear tests in Nevada. Oh and there is a beauty pageant to crown Miss Atomic Bomb in an attempt to make a doggy hotel a bit more classy.

Much of the source material is based on actual events. There were above ground nuclear tests that were a tourist attraction for Vegas. But what gives this piece its appeal is its star casting and ensemble who are working hard to show us a good time. 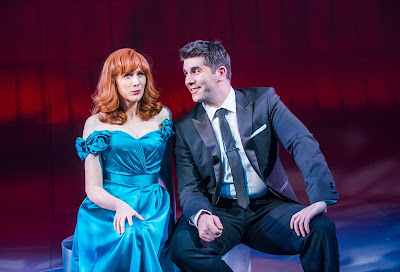 Catherine Tate is a glamorous beauty who wants to move to California. She has a wonderful accent and sings her heart out while wearing high heels and a push up bra. It's hilarious, particularly when she gets the chance to riff on the material and talk about the time she was on the sheep farm.

Florence Andrews is a delight as Candy Johnson, the sheep farm girl, who enters the beauty pageant to clear her grandmother's debt. She has great comic timing and a strong set of vocals. If only she had a twitter account...

Dean John-Wilson cuts a dashing figure as the heartthrob and runaway soldier, Joey. He is found by Candy hiding in her zucchini patch. And any show that has a man brandishing a zucchini as a weapon can't be all bad. 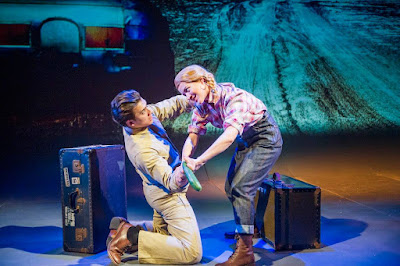 Simon Lipkin is hilarious as the hotel manager Lou. With his life on the line (and at the risk of getting shot by the mob boss who owns the joint), he sets of to turn his hotel into a classy place that also crowns Miss Atomic Bomb.

When Lipkin and Tate team up towards the end of the piece, this show really soars. The two have a wonderful comic timing and chemistry that makes you think of the potential this piece has.

But the piece unfortunately feels like it was written by committee and has enough material to fill several musicals over. There is a subplot on the farm with dead sheep. Another about an evil scientist. And even another about a relentless debt collector (Daniel Boys, who seems to be wasted in a role that sends up Javert from Les Mis). It can't quite figure out what sort of comedy musical it wants to be and most of the music is forgettable pastiche.

But the piece feels like a labour of love and even with its shortcomings, fans of the performers should see it. Others should hope there is a future rewrite.

Miss Atomic Bomb runs at the St James Theatre, which has to be the nicest West End venue by far with its comfy seats and clean bathrooms, until 9 April.

First impressions immediately after the show with @Johnnyfoxlondon follow.  We said nice things...