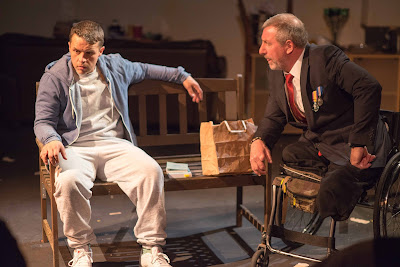 The vagaries of co-dependency, self harm, rehabilitation and a lot of blue language is the subject of Blue On Blue. But what sets the piece apart are the strong performances by its leads as they explore the traumas past and present in a man's world.

Written by Chips Hardy, the piece is getting a revival at the Tristan Bates theatre. It is a dark piece which doesn't always land its jokes given the seriousness of the subject matter. But it's worthwhile all the same. 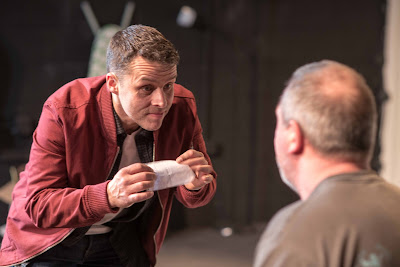 Losing his legs from friendly fire, army veteran Moss lives in flat with his nephew Carver. Carver is on parole having been caught following a botched burglary. But he also likes to cut himself up. Usually in the legs.

Their world is disrupted when Marta, a young and beautiful carer from Budapest, enters their lives. And her actions, although well-intentioned, lead to unforeseen consequences.

Blue on blue is a military term for "friendly fire". Here it is how the three characters help and hurt each other.

Darren Swift, who lost both his legs in combat in Northern Ireland, gives a brutal honesty to the role of Moss. He has command of the stage whenever he is on it and is both engaging and hilarious. Daniel Gentely as Carver, serves as a contrast with his intense seriousness, serving to hide his demons. Together they make a terrific sparring couple. 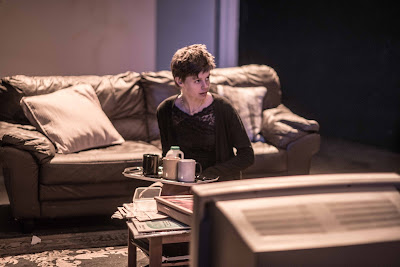 Ida Bonnast as Marta has the more difficult role as she seems to have the character that makes the least sense. She is tasked to do a range of things to propel the story along that at times feel contradictory. It is as if the role is just to be a spark to ignite the fires that will follow rather than serve as a real character.

Still, there is a wonderful scene where she offers Carver a mug of tea. The tea is served in a mug with the words "unt" on it... It's that kind of play... A gritty expose from the man cave from The Skullcap Collective.

Blue On Blue plays at the Tristan Bates Theatre until 14 May.