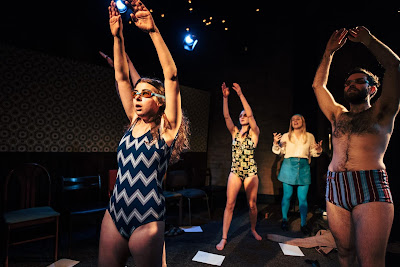 The sexual revolution wasn't quite as it seemed in this style over substance account of sex in the seventies (or should that be present day)?

The Wardrobe Ensemble had a hit in Edinburgh last year with this show that goes beneath the hype of the sexual revolution, only to find that things were just as awkward then as they are now.

Narration, inner monologues and jump cuts to the present day pepper this story of a group of young people discovering sex in the 70s.


The theatrical tricks are quirky at first. But after an hour they feel repetitive and get in the way of real characterisations and story development. In the end there are few surprises.

Still there is a throbbing soundtrack, bad hairstyles and an awful lot of polyester. There are some nice touches that hint at the hypocrisy of the time. And when the sex does finally come, it's a spectacular swimming extravaganza.

But maybe you either had to have been there in the 1970s, or be a twenty-something now to get it. For me it was a shallow experience.

The Wardrobe Ensemble are a Bristol-based group of artists that work to create new works. This one pulses and throbs until April 23 at Shoreditch Town Hall. There is a tour that follows.