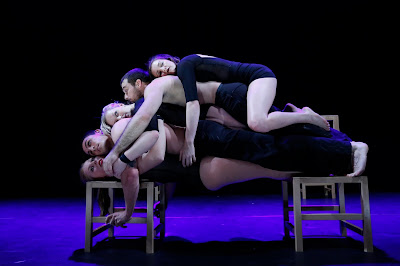 Closer, by circus troupe Circa opens the London Wonderground on the South Bank with an intimate yet spectacular show about the power and strength of the human body.

There is beauty in this stripped back circus extravaganza of human acrobatics that flow seamlessly from one to another.

A simple staging, with a few chairs and spotlights open up to an incredible array of performances. The effect is mesmerising as the performers make the impossible seem effortless. 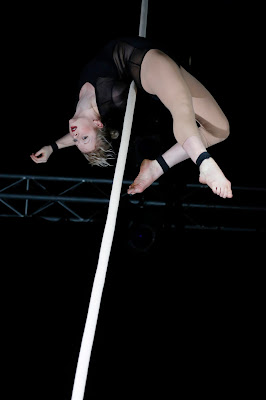 Opening with a woman on a rope, using only her hands and strength, she falls almost to the floor. Then there is a sexy man and woman on a trapeze.

Soon there is men standing on women standing on men. The audience gasps but we haven't even got half way through the piece. There is a wonderful bat-like routine on a trapeze where Jarred Dewey channels his inner vampire.

There is even a short piece of audience participation which is beautifully handled as the cast throw themselves at the guests on stage... And deal with the humiliation of being "dropped".

Throughout the piece the themes of belonging, connecting and being part of something much bigger seem to abound. The title of the piece could refer to the intimate space of the upside down purple cow or the need to belong to someone or somewhere. 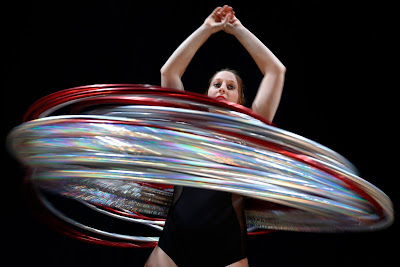 The audience saved the biggest cheers of the evening for performer Lisa Goldsworthy. She spun enough hula hoops so that she looked like she was wearing a sparkly dress. Up to this point in the show she was the strong woman of the piece. But here she was the character who could handle with balance and determination the hoops thrown at her from various points of the theatre.

By the climax of the show, with its tower of chairs, everything had been so engrossing and enjoyable that you could easily see it again.

Closer by Circa runs at the London Wonderground until 7 June. Don't miss it. Although you may wish to use the facilities beforehand. Or avoid drinking so much at the various bars outside before the show. For such a small audience and for a show that runs only 70 minutes, the constant audience departures and returns were distracting. 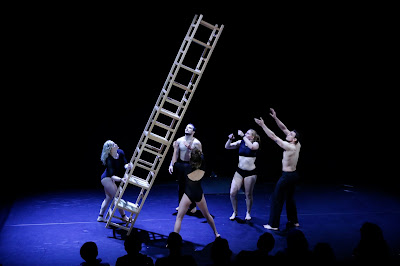