Under the skin: Bug @found111ldn 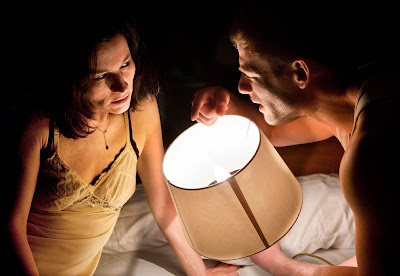 James Norton and Kate Fleetwood act in your laps as two troubled souls stuck in an Oklahoma motel.

Found 111 is on the site of the former Central Saint Martins School on Charing Cross Road. It is one of the less glamorous West End theatrical locations, but it has to be one of the most memorable. You walk up a series of stairs surrounded by a lift well (the lift doesn't work by the way so you do have to take the stars), and then find yourself in what looks like part of a cheap motel.

There is an unmade bed in the centre and a side board for coffee making facilities. It is an incredible simple yet evocative design by Ben Stones. Desperation fills the air even before the show starts, but that may be because people are in search of the best seat in the house.

The audience surrounds all this in what has to be a new trend in voyeuristic and shock theatre. As the action unfolds in unexpected ways right in front of you at times there is nowhere to turn to avoid seeing it. Given the gore has had some people passing out, you may thank yourself for arriving late and missing the best seats... 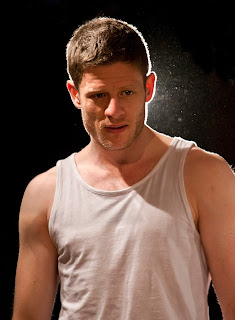 Fleetwood plays Agnes, a cocktail waitress in a lesbian bar. She is hiding from her ex-husband (Alec Newman) and still grieving over the disappearance of her son. An introduction by her friend (Daisy Lewis) to Peter (Norton) leads him to stay with her in the model. Initially he sleeps on the floor, but is soon in her bed.

The cleverness in the piece is how everything is twisted from what we think it is in the beginning. The abusive ex-husband, the caring friend and the sweet young man, Peter. Once Peter is bed with Agnes he thinks he has found a bug. Soon both of them are convinced they are victims of an infestation of a sinister kind.

The resourcefulness of Fleetwood and Norton make this a taught and intensive piece. Fleetwood seems initially so self assured but she brings out the loneliness and sadness of the character as the piece evolves. Similarly Norton's sweet and charming demeanor conceals darker and horrific behaviour.

Originally written in the aftermath of the Oklahoma bombing, in the light of the Edward Snowden revelations, surveillance concerns and paranoia takes on a new topicality here. It makes you think it is less delusional than maybe originally intended. This means that you are never certain what is real or imagined. Or what should be funny or horrific. Adding to the intensity are some terrific sound effects by Edward Lewis. If the gore doesn't make you jump then the noises sure will.

It is enough to make you think there is something just under your skin. And not just this terrific production... Don't miss it, if you can get a ticket. Bug runs until 7 May.