Adult themes and other tunes: Closer Than Ever @ThePheasantry 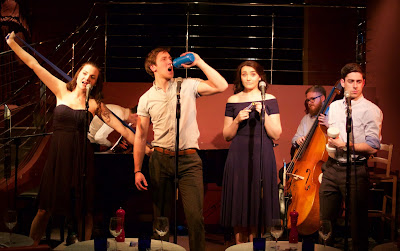 Closer Than Ever, which had a brief run at The Pheasantry last week, was a musical appreciation of the more serious works of Richard Maltby Jr and David Shire. With its provocative subject matter and jazz infused score I am hoping it won't be long before we see it return.

Closer Than Ever follows on from Maltby and Shire's earlier revue, Starting Here Starting Now. The latter had songs of innocence and wit, here the stories are more reflective about the compromises, disappointments and other charms of adult life.

Getting old, mid-life crises, sex during lunch breaks. It's all laid bare here. Many of the songs had been intended for shows (five of them were cut from the musical Baby). Others were musical ideas that Maltby had been compiling over the years. It is intriguing that many of these songs don't seemed to be performed much as cabaret standards. Given many of the songs dramatic and comic potential hopefully this revue will inspire more mining of the Malby and Shire music book.

The cast assembled worked well with the material. Wendy Carr delivered a great performance of The Bear, the Tiger, the Hamster and the Mole. This song looks at both the reproductive habits of various species and the infinite variety of metaphors used to put down women.

Emily Chesterton was witty singing Miss Byrd, a song about a woman that sings after lunchtime liaisons.

Richard Carson showed off his musicality and range singing about being an ordinary man in One of the Good Guys.

Nicholas Corre was just as memorable leading the troupe with the song about no regrets, Next Time.

When they came together the results weren't always successful. Singing together and loud made for a bit of a muddy sound a times. It was difficult to tell whether it was the sound mix or the blend of voices. The lyrics are often intricate and need a delicate delivery to support it.

Still under music direction of Nick Barstow and Doug Weekes on bass, it was a fun and enjoyable evening appreciating some adult music... 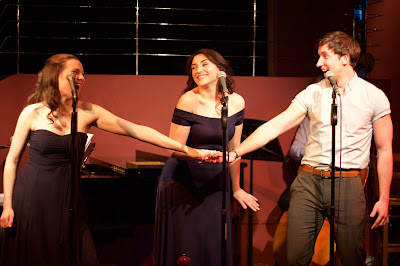