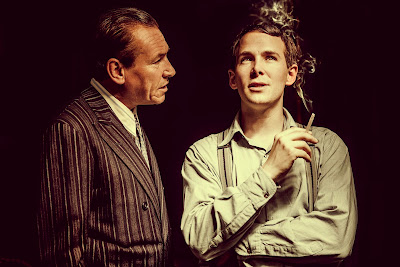 Gay angst, cigarettes and gas. Kenny Morgan at the Arcola Theatre re imagines Terrence Rattigan’s play The Deep Blue Sea as how things might have happened.

The suicide of bit actor Kenneth Morgan may have been the inspiration for this work about a woman abandoned by her alcoholic younger lover. Here Mike Poulton takes the story and places it in gritty, closeted post war Camden.

After a decade of living in a closeted relationship with Terrence Ratigan, Kenny Morgan leaves him for a young bisexual actor, Alec. 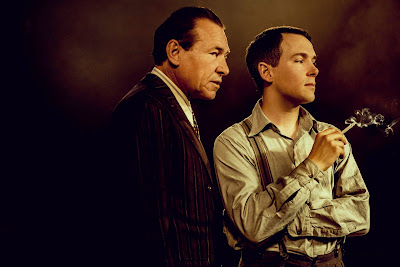 Kenny and Alec are living together due to a lack of work, sharing a squalid little tenement in Camden. Kenny finds himself having to chose between the secretive life as the playwrights lover, or the abusive and vague relationship with Alec. After a suicide attempt, the neighbours try and phone a relative or friend. The first person in his address book just happens to be Terrence Rattigan.

The context is important. Gay relationships were illegal until 1967 and attempting suicide was illegal as well.

Paul Keating is moving as the flighty, conflicted and romantic Kenny. This piece when it focusses on unrequited love and despair gets its strength. Kenny feels he has to choose between a life in hiding or one falling apart.

Simon Dutton is a delight as the suave and sophisticated Rattigan. His interpretation of the man shows while he cares for Morgan, it is not a relationship of equals. He needs to lead a double life for his parents and for his public. But he also needs to control those around him.

As the abusive lover Alec, Pierro Niel-Mee is particularly good in an unsympathetic role. It is clear that he shares few of the same desires Kenny does and is not the man Kenny wants him to be.

The characters of the neighbours serve as the human element of the piece. George Irving is understated as the Jewish doctor, struck off the medical register for a mistake that isn’t explained. He points out that for many death has not been a choice. Meanwhile Matthew Bulgo as the clerk in the Admiralty highlights the virtue of the common man.

It is interesting and contemplative. But the lengthy exposition and adherence to the structure of the Deep Blue Sea makes the piece feel a little overlong and repetitive at times. The ending also seems forced with the unexpected return of the lover Alec, and ultimately unconvincing.

Still, with it’s gas pipes and stained wallpaper, designer Robert Innes Hopkins and director Lucy Bailey have created an evocative production. From the moment you enter the theatre there is a strange smell as if they have managed to make “theatrical gas”. Gas seems to be on everyone's minds. From the victims of the war, to gas leaks and to suicide attempts. New gas pipes were revolutionary and transformed the city. But as noted in the forward to the play text in the year that Kenny died there were around 3000 recorded attempts at suicide by coal gas. Life was getting easier and harder all the time.

Kenny Morgan is at the Arcola Theatre until June 18, but you get the feeling that the piece will have a longer life. The National Theatre production of The Deep Blue Sea opens this week.