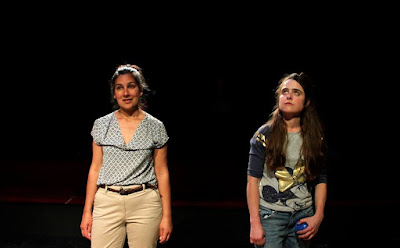 Stone Face by Eve Leigh, tackles the subject of abuse and recovery in a sensitive and humorous way. It is currently playing at the Finborough Theatre. With its gentle storytelling, it draws you into the story and allows the performers to shine.

Inspired by true events, the story revolves around Catherine. Found after her mother killed herself, nobody is sure if she ever left the one bedroom flat they shared. She can neither walk nor speak.

It starts with her receiving medical care thanks to a tabloid newspaper campaign that manages to finance it. Catherine's half sister Ali, her doctor and a tabloid journalist are the only people in her life. Over the course of roughly ninety minutes we are drawn into a world of lost children, mental health and isolation.


The production focusses on the bare minimum here. There is a simple set with projections and block furniture. Things open up, get assembled and then disassembled as Catherine begins her new life.

Director Roy Alexander Weise, recent recipient of the JMK Young Director Award, avoids sensationalism and obvious shocks in this production. But things are still disturbing enough and always focused on the performers.

The challenge of depicting the four characters in the piece is down to Ellie Turner and Liz Jadav.

Taylor has to switch between the intense physicality of the role of Catherine to being her outgoing and chatty half sister. It is fascinating to watch the contrast and contemplate the different paths the two sisters had by chance.

Jadav plays the characters with the best intentions. She brings real warmth to the role of the nurse Cutler. When you learn she left the NHS to work where there are resources to look after people, you feel that she may have a point. Her alternative role as the tabloid journalist who writes the stories that keep the donations coming in. Here she is more vulnerable and full of contradictions.

At times the doubling of the roles is a little jarring. There is little opportunity but to put on a jacket or take one off to physically distinguish between the roles.

It is only a short piece lasting a little under ninety minutes. The subject matter and the characters make it feel like you could have spent longer with them to understand them more. Perhaps after this world premiere run there is a bigger version of this story to be told. For now, this one is terrific all the same.

Stone Face is at the Finborough Theatre until 11 June.