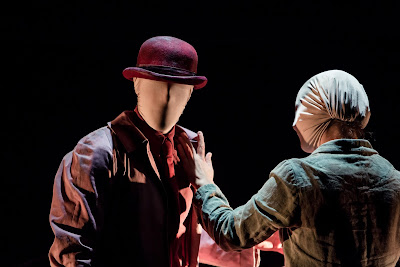 Theatre Re's Blind Man's Song is a fascinating meditation on the subject of dreams and immagination. For just over an hour you are mostly entranced by the story unfolding before you.

As the theatre opens you are informed that the best views were from the back of the theatre. This was intriguing (and counter-intuitive). But here the seating has been reduced at The Pleasance, making the space more intimate than usual.

Taking my seat, I couldn't help but notice the eerie haze that hung over the stage at the begining. What space were we staring at?

The main character, a blind musician soon enters. The space turns out to be his room. He is tapping about to find his way and soon this becomes the soundtrack. 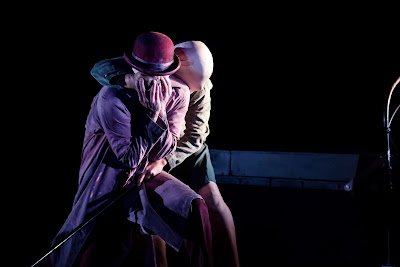 As he lies down on his bed, alone, a man and woman appear. Are they his immagination? Are they the life he wants to lead? It is all up for speculation as physical theatre, mime, sounds and illusion combine to tell a series of stories about love, hope and mystery.

The piece took inspiration from interviews with blind and visually impaired people. It's strength is in its power to communicate without words.

You are drawn into the world through the minimalist soundtrack performed on stage by Alex Judd. He is the blind man. It amplifies noises onstage reflecting the world of the visually impaired. A loop pedal combines these sounds with violin and keyboard.

Music and movement become dreamlike. Although being minimalist music it at times felt a bit like a recurring dream... Not all the segments felt unique and some of the wonderment was lost as the piece progresses. At times you get the sense that you had already seen that.

But perhaps this is the point of it all and part of the frustration of minimalism, and being blind. Employing various theatrical tricks, director, conceiver and performer Guillaume Pigé along with his co-performer Selma Roth elegantly move about. Their faces shielded from view. But you also get the sense that this work could be more.

The piece debuted at the 2015 International Mime Festival and is at The Pleasance until 15 May. Dates follow in May in Hereford, Oxford, Chippenham and Liverpool before they head to Germany and France. 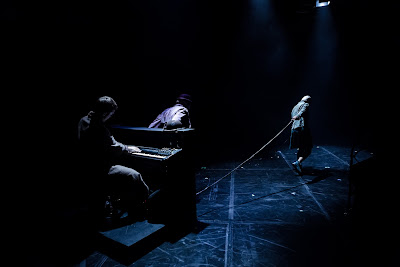