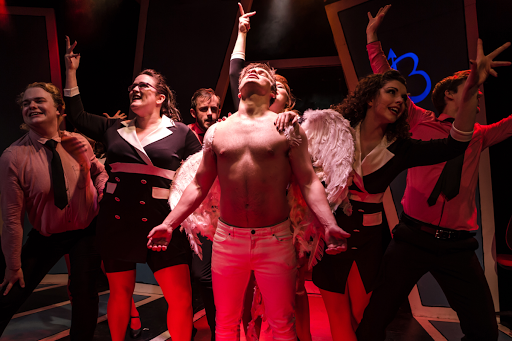 Strong performances and a marvellously silly premise can't overcome Devilish feeling not much of a guilty pleasure.

Currently playing at the Landor Theatre, the venue has been the home of a number of inspired (if a little rough around the edges) new works or fresh revivals of older ones.

With Devilish, an interesting premise did not lead to a particularly engaging show. The paper thin plot and various superfluous characters and songs made it a tough night. And for a show with cardboard characters, it takes itself a bit too seriously.

The story goes that an angel is shot down from the sky and crash lands in beautiful downtown Clapham. He lands in the garden of a young lady called Ruth, who just happens to be the PA to the director of television studio, desperate for a new hit reality show. Soon "Angel" is a reality television star.

The fact that a PA owns a house in Clapham is the least of the problems this story has. Perhaps she inherited it from her dead boyfriend (who looks a little like Angel). Things even get more complicated when he starts sleeping around with his fans.

As a fish out of water story it seems to have missed much of its potential for how an innocent young man would go about exploring downtown Clapham and surrounds. Where are the drunken antics, horror at overpriced drinks and ambivalent sexual attraction that is so common in the area?

What saves the show is the enthusiastic performances from the cast. Alex Green as Angel bursts on stage with boundless enthusiasm. Even suffering under what looked like a bout of man flu he will made the most of the material with his clippered chest and endless smile.

As the luckiest PA in Clapham, Ruth, Victoria Hope works with what character she is given. Katie Ann Dolling as Maddie gets some laughs as  star-seeking weather girl.

The supporting cast fare better with milking their scenes and not taking the piece too seriously. Louie Westwood as a camp TV compère is hilarious with his over the top announcements.

Helen Ward-Jackson and Laura Hyde in the ensemble also play various roles for laughs with knowing looks and wry smiles.

The set seeks to play up the cartoonishness potential of the piece and looks terrific. And the choreography by Adam Scown, makes the most of the space with just enough high kicks to thrill the audiences (or give the ones in the front row a bit of a shock).

All told, not quite the sinful pleasure you would hope for at the Landor. But the wings look nice.

Devilish runs at the Landor Theatre until hell freezes over or 29 May. Whichever comes sooner. 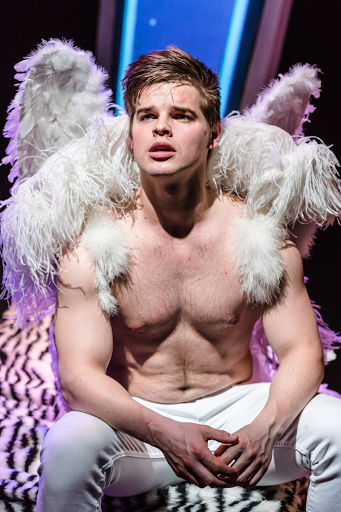