The brown word: The Spoils @TrafStudios 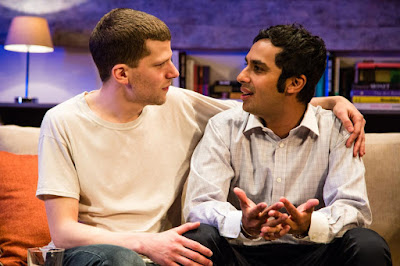 Bromance is in the air in with The Spoils, Jesse Eisenberg’s funny new play now at Trafalgar Studios. Women and relationships feature throughout the piece. But the real relationship at the heart of this piece is between obnoxious New Yorker Ben, and his flatmate Kalyan, a hard-working immigrant student from Nepal.

Eisenberg is making his West End debut as a writer and star of his show which has transferred from New York. As Ben, he is a tightly wound guy full of tics and mannerisms as he rages against everyone and everything. He does not really have a job and lives in a flat his father bought him. It’s a mostly unappealing character but Eisenberg gives him enough of the best lines and occasional vulnerabilities to make you feel a bit sympathetic towards him.


Big Bang Theory actor Kunal Nayyar plays Kalyan. Perhaps out of charity or the need to have someone in his life, Ben allows him to live in his apartment rent free. Kalyan is his connection to the world and his confidant. He is there to listen to Ben and give him hugs when necessary.

The play puts Ben in a world surrounded by people in relationships. There is Kalyan and his girlfriend, Reshma (Annapurna Sriram), a young doctor. And there is Ben’s old school mates Sarah (Katie Brayben) and Ted (Alfie Allen).

A chance encounter with Ted leads to a series of revelations about Ben’s past fantasies with Sarah. These mostly involve fairly descriptive encounters getting naked and having Sarah defecate on him.

The comic potential from the embarrassing sexual fantasy probably gets less reaction this side of the pond. This is understandable given our fascination with urban legends of celebrities and glass coffee tables (not to mention Gilbert and George’s seminal work, The Naked Shit Pictures). Only towards the final scene do we get some real comic moments as Ben prepares his flat for Sarah’s arrival. This mostly involves microwave popcorn and a broomstick.

But even if it isn’t a laugh out loud comedy, the acting is superb and the characterisations nuanced. Joining the cast in this transfer, Katie Brayben grounds this piece with incredible understanding. As Ted, Alfie Allen gives the piece an optimism and energy.

You may be forgiven for thinking that a piece about a hard working immigrant student and his doctor girlfriend might also lead to a comment about immigration. But Eisenberg and director Scott Elliott keep the focus on things that are bright and breezy. This is the world of a casual friends and chance encounters and mild humour. Not biting commentary on the state of the world. But it does give new meaning to the phrase, “you’re shitting me?”

This review first appeared in Londonist on 5 June 2016