Mad about the boy: Britten in Brooklyn @wiltonmusichall 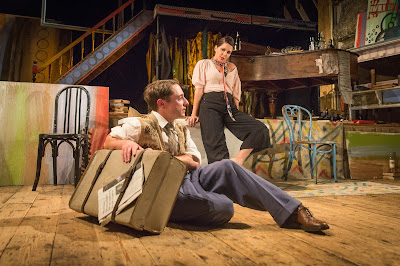 Britten in Brooklyn currently playing at Wilton’s Music Hall is a good looking production. But the trouble with a piece about artists at their least artistic period of their lives is that not a lot happens. In the end you feel as if you have been watching Celebrity Big Brother, without the cheap thrills of seeing anyone being a cat... Or getting confused about which David died.

At the height of the Second World War, Benjamin Britten takes off to America, avoiding conscription and the conflict in Europe. He stays in Brooklyn in an artistic commune with his friend poet WH Auden. Writer Carson McCullers and Gypsy Rose Lee are also staying there.

I was half-expecting an evening of debauchery and creativity. But it was mostly introspection. Still upset over the death of his mother and reception of his works in England, Britten is seeking solace from all that. He also is coming to grips with his homosexuality, budding relationship with Peter Peers and his pacifism. 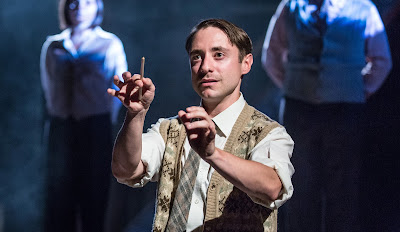 Britten and Auden are working on their opera, Paul Bunyan. It would turn out to be a flop. Here it comes as no surprise as you are led to believe there was not much creative effort behind delivering it.

Britten and Auden fell out and never spoke to each other again. Alan Bennett imagined a reuniting with his Habit of Art. But here you are left wondering why they would have come together at all.

There are hints at a potential sexual relationship and unrequited love between Auden and Britten. But here there is no chemistry or creative spark between the two on stage.

As Britten, Ryan Sampson delivers a nuanced and emotional performance. You get a sense of the young composer coming to terms with who he is and what he wants to do. And we are lucky enough at one point to hear him sing as well. But he does come across as an awfully chaste man. This does not chime with what is known about his life, including an interesting relationship with one young boy of 13 during this time.

John Hollingworth seems miscast as Auden. He doesn’t come across as lord and master of a squalid artistic commune in Brooklyn. He seems more like a slimy television presenter. That he has any feelings for anyone comes as quite a shock in the second half of the piece.

Sadie Frost gets top billing but she has less to do here as Gypsy Rose Lee, apart from occasional motherly advice and whiffs of lesbianism. Meanwhile Ruby Bentall at writer Carson McCullers is reduced to occasionally rolling about in convulsions.

Writer Zoe Lewis notes in the programme that she took her experiences from the late nineties Brit-Art scene. Perhaps that is the problem. Confusing a movement with nothing to say for one that did. Given the subject matter there is no doubt a good play lurking within the subject matter. It is a pity none of it is on show here.

Directed by Oli Rose, Britten in Brooklyn is at Wiltons Music Hall until 17 September. 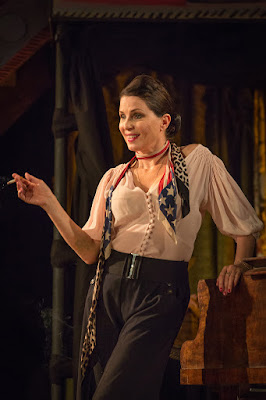