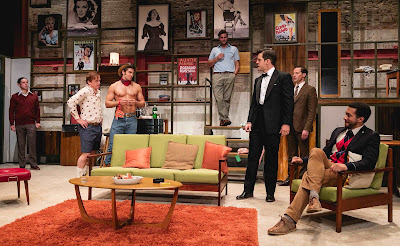 The glass may be half empty but it's always going to be full of liquor or bile in The Boys In the Band. The alcohol starts flowing and next follows the loathing. But something unexpected watching this piece. Even amongst the bleak depiction of pre-Stonewall New York you get the sense they're a family. And they will probably patch things up in the morning. Once they get over their broken noses and hangovers. It is now playing at the Park Theatre before heading on a tour.

Mart Crowley's play was the first to present gay life to a mainstream audience. It is important to appreciate that it was once unique. Nowadays there isn’t a week that goes by in London when there isn’t a play about gay men in London. Usually it involves the actors getting naked. But this takes you back to an earlier time.

It is before chemsex. Before AIDS. Before Stonewall. Just drinking, poppers, a bit of dope and a whole lot of self hatred.  But an excellent ensemble and a brisk pace makes it for a crackling fun evening. 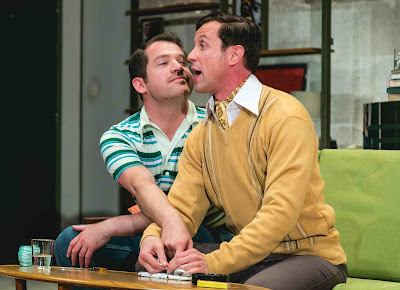 Michael is about to throw a birthday party for his friend Harold.  Suffering from Catholic guilt, battling alcoholism and without a job he is the hero and antihero of the piece.

The guests arrive in an orderly fashion. There is Donald who has dropped out of the city. Bernard the African American who was in love with a white boy in the house his mother worked as a maid. Emory the flamboyant designer. Larry the photographer who is always on the prowl. Hank, Larry's live in boyfriend who was previously married. As Emory's birthday gift to Harold he hires a cowboy prostitute (who shows up early so he can get to bed early as he hurt himself at the gym).

But the evening takes an unexpected turn when Michael's college friend Alan unexpectedly arrives wanting to tell him something. The last to arrive is the Harold, the self-described "Jew Fairy". By then the drinks and the high camp anxiety are starting to take their toll. 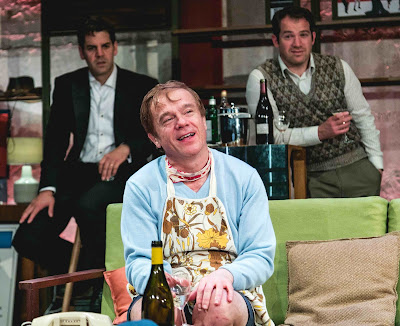 At times it feels like watching a period version of Sex And The City. That show has always felt a bit like watching four gay men played by women. Here it is as if Carrie more like the bitter and twisted person you suspect she was.

Ian Hallard has the difficult challenge of playing the self-hating Michael. He comes across so nice in the first half it is difficult to understand the spark that ignited the fury in the second. Was it the closeted yet dashing ex college pal spurning his interest? Or just that he is having a mid-life crisis?

There isn’t much time to ponder these things with Adam Penford's brisk direction keeping things fast and flowing. The rest of the ensemble bounce off enough fabulousness and one liners to make your head turn.

As the high-camp Emory James Holmes gets the best laughs. And Mark Gatiss as Harold serves bile and humour in equally calculated measures. There is a great soundtrack accompanying the show too. When they burst into a dance routine you can’t help but wish perhaps they could have burst into song too.

The Boys in the Band by Mart Crowley and directed by Adam Penford is at Park Theatre until 30 October before heading on tour to Salford, Brighton and Leeds. One hears that it is selling so well you may need to bitch-slap someone to get a ticket. Londonist attended on a complimentary press ticket.

Production Photos by Darren Bell. A version of this review previously appeared in Londonist. 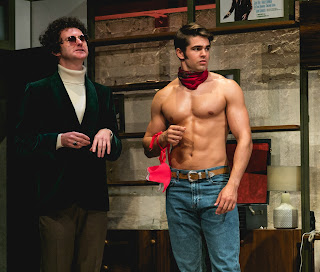