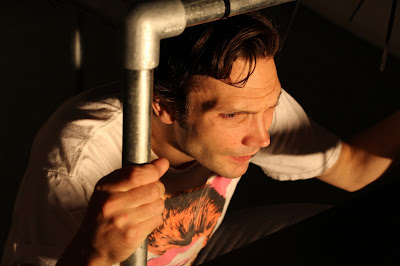 It’s part journey of discovering who he is, but also a desire to connect to his father with the music of his hero.

As Martin, Alex Walton contorts and moves about the stage as the lanky awkward teen and occasional other character on the journey. As the sole performer he captures the spirit of the young fan and the people he encounters. But he also engages you as a storyteller of this young man’s journey to London.

Along the way there are Bowie songs, therapy sessions about bulimia and a dream sequence where he speaks to Bowie. The conversation with the other-worldly Bowie is a pre-recorded voice supplied by Rob Newman. Projections of album covers, London locations also hit us along the way. 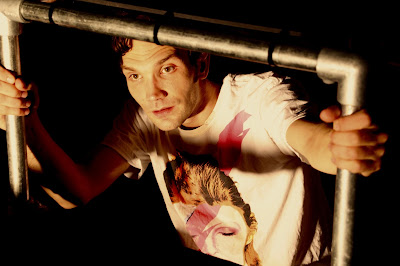 It is a simple premise that works well in the space of the Waterloo East Theatre. There isn't much to the staging but some simple projections and a few blocks but it is evocative thanks to Walton's performance.

The pilgrimage to sites across London where Bowie lived and work tends to drag (and take the focus off Martin). But the search for the meaning of life through the music of Bowie can’t be a bad thing. And it will have you recalling the days of spending all your spare money on records (if you’re old enough).

It's a short piece and worth a look. Written and directed by Adrian Berry, From Ibiza to the Norfolk Broads is at the Waterloo East Theatre until 6 November. It then embarks on a tour that runs through to December.