There are various things you can take from Fool For Love playing at Found111. There isn’t much of a plot. It is more a series of sparring rounds that serve as a star vehicle for great performances. But you walk away thinking how love fades, horse floats burn well and incest is rife.

It’s random in a way but enough to thrill and amuse. The couple in focus are Eddie (Adam Rothenberg) and May (Lydia Wilson). They take pot shots at each other and then kiss and make up. Along the way there is a mysterious old man (Joe McGann) and a new suitor Martin (Luke Neal).

Sam Shepard wrote this piece between love affairs. He covers how two people can simultaneously love and loathe each other. But past injustices give way to more secrets and lies that suggest that old wounds don’t heal. They just get ripped open again and again. 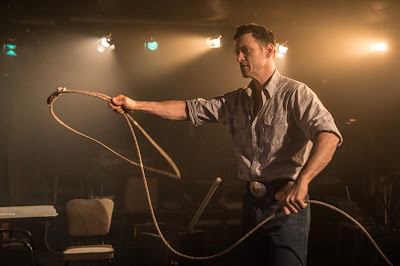 This is a short and intense piece. It runs at about 70 minutes and so violence erupts and then disappears. But something is always around the corner.

Rothenberg twists and moves about the stage with his drawling swagger. Although with his missed lasso work you do end up wondering just how much of a big shot cowboy he is. Wilson is his equal match in the endless fighting and pointscoring.

There is not much physical violence here although at times this is implied. Instead there are the slamming doors, the scowling looks and the dialogue. Stories are told and then retold. By the end you’re left piecing together what might have happened.

Found111 is again transformed into a dingy motel for Sam Shepard’s play. Depending on where you sit you might find yourself in a tight claustrophobic space or staring out at the endless desert. I had the former view and combined with the remains of a dingy old art school heightens the atmosphere and the emotions.

One waits with anticipation at what future grim space they can transform into a must see theatrical venue in the West End next year.

An evocative night, but maybe not something you would go to on a first date…

Fool For Love by Sam Shepard and directed by Simon Evans is at Found111 until 17 December. It's the last show there so if you can handle the stairs and the claustrophobia don't miss it... 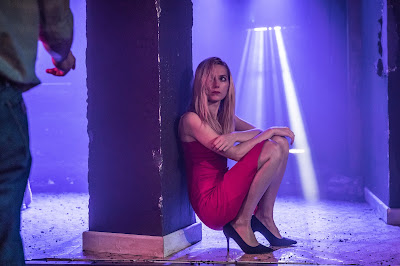