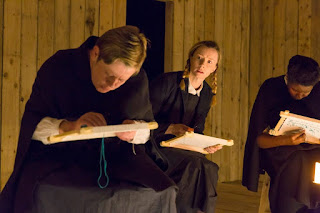 The Sewing Group is a fabulously subversive piece of theatre at the Royal Court. The piece by EV Crowe explores secrets, the impact of technology, the overcomplicated and the over analysed. All within a wooden box-like set lit by candle light.

It starts out innocent enough, but then has you perplexed. There are a series of very short (and disorienting) scenes where very little is given away. There are long silences and long blackouts. In one scene all that takes place is a distant fart. It was so distant that it made me wonder whether it came from the audience. 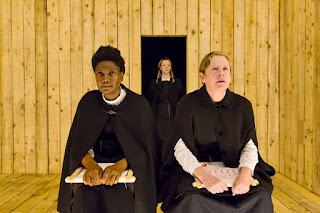 The story centres around the arrival of a woman at a village in pre-industrial England. She wants to learn to sew and understand their simple way of life. But things don’t turn out to be what they seem. With anachronistic references and odd behaviour the piece slowly builds to its twist. It would be wrong to give this away but the twist is both amusing and a bit sad.

In keeping with the central message of the piece it would be wrong to over complicate things by saying too much about it. There is a strong central performance from Fiona Glascott as the resilient mystery woman. She may have strength but it also may be masking an emptiness.

Directed and designed by Stewart Laing, The Sewing Group runs until 23 December. 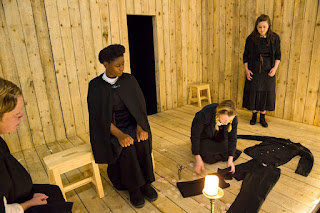