Meanwhile in Battersia: Scrooge and the Seven Dwarves @theatre503 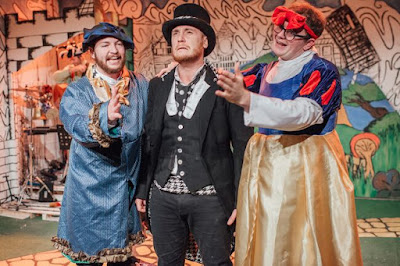 There is a scene in the early part of Scrooge and The Seven Dwarves at Theatre 503 where Santa appears and asks the children in the audience what they want for Christmas. "A butler" replies one. You know you're in Battersea with responses like that.

But this isn't just a panto that you get your nanny to take the children to while shopping on Kings Road. The Sleeping Trees have again fused fairy tale and Christmas stories to create an anarchic panto tale about Christmas. With lashings of silliness to boot it may not be a traditional panto, but it is still a lot of fun. 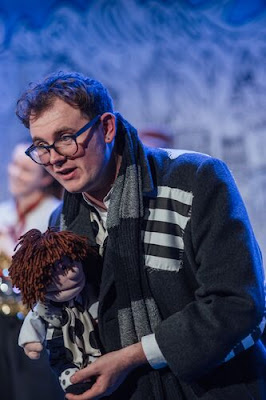 The premise is that the wicked witch has stolen Christmas spirit and everything is upside down. Snow White has lost her seven dwarves in Fairyland and meanwhile in Victorian London Tiny Tim has started to develop a nasty cough. Only one man - Scrooge - can save Christmas since he had concealed his Christmas spirit under a lot of bah and humbug.

Along the way there are poison lemons, vain mirrors that run out of batteries and a one man band in the corner (that's Ben Hales). There is also a subplot about the troupe going to Hollywood too which is probably a story too far.

But it is hard not to like (and laugh) at the ingenuity of John Woodburn, James Dunnell-Smith and Joshua George Smith of Sleeping Trees. They create a high energy panto consisting of Scrooge, Snow White, the Wizard of Oz, Mary Poppins, the seven dwarves and Santa.

Directed by Simon Evans, Scrooge and the Seven Dwarves is at Theatre 503 until 7 January. For little kids and big kids alike. 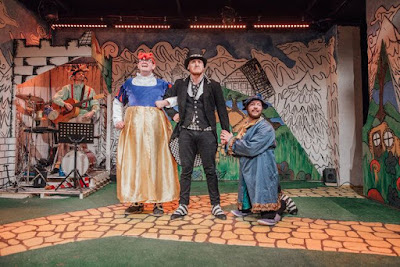