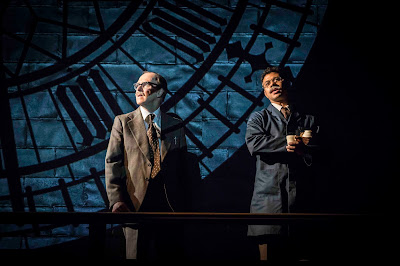 Top ten things about politics you might learn from catching This House at the Garrick:

It's a relentless cat and mouse game set in the bowels of the Palace of Westminster as the whips for the conservatives and labour try to keep their members in line. There isn't much drama but an awful lot of comedy in retelling the period of the minority Labour government from 1974-1979.

There is so much comedy that it is easy to forget that country was a mass. Mass strikes, garbage on the streets, high inflation, policies failing to pass. It's all fun and games until someone needs to go begging for an IMF loan...


3. Maybe you just had to be there

Whether you understand or care about the show probably does depend on whether you lived through the period. The piece does hurl large chunks of parliamentary tradition at the audience in the guise of dialogue to new members. But ultimately it feels like a memory piece for the myopic. 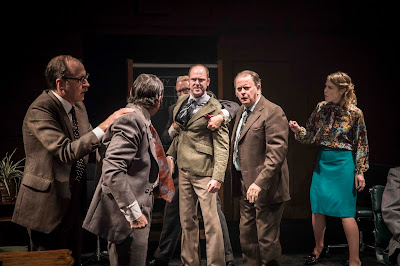 4. Small fry keep things going (for better or for worse)

There are no big politicians in the piece. Callaghan and Thatcher are talked about but the key part of the story is the relationship between the Deputy Whips for the Conservative and Labour parties.  This time around the relationship didn't feel believable. Characterisations begin and end with the types of suits the characters wear. Tailored wool for the Conservatives and ill-fitting man made fibres for Labour.

The play premiered at the National Theatre in 2012 while we were enjoying the coalition government. Looking back on it now, the coalition government of 2010 - 2015 seemed pretty tame and successful compared to what happened in the 1970s. Nick Clegg has a column in the programme and surprisingly (given what happened last time and what followed him) avoids any gloating.


6. Some jokes are too soon

All the references to Europe and the last EU referendum seem to elicit nervous laughter. Perhaps it is too soon to make jokes about that either for this audience.

Big Ben breaks down and Parliament is crumbling. Just like it is now.


8. It needs epic scale to distract from the pointlessness of it all

The play feels a little squashed in the Garrick. While it brings out the basement feel of the Government and Opposition Whips' offices it tends to feel like it is missing the epic scale that it had at the National. There in the cavernous spaces of its theatres the madness seemed heightened. 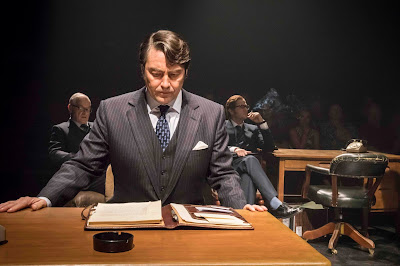 9. Some writers just can't help themselves

The piece is directed by Jeremy Herrin and written by James Graham. Graham likes to write about political dramas having written Tory Boyz, The Vote and possibly a future drama (or hopefully a comedy) about Brexit.

There is an on stage bar. And on stage seating. I wasn't sure about either since the bar in the play serves warm beer and those seats on stage don't look that comfortable. And you have to deal with characters dying in front of you at various points. Politics like drama can be a cruel business.