Playing in a rock and roll band: Muted @mutedmusical @BunkerTheatreUK 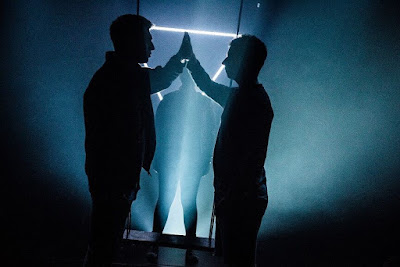 Muted, a new British Musical explores grief and loss through music. It's playing at the new theatrical space in Southwark known as The Bunker. While it still feels as if it is a work in progress, it's prospects look good. Perhaps just like the characters within the piece.

Muted tells the story of teenager Michael. He is a singer in a band on the brink of stardom. But after his mother dies in a hit and run accident he quits the band and stops speaking. Three years on his former band mate Jake is trying again for a shot with the band. And Lauren, Michael's ex who is now with Jake has been enlisted to try and get him to speak. But soon this drama proves as difficult to deal with as it is to describe... 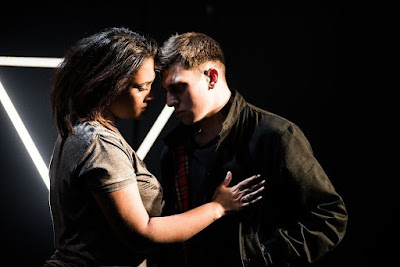 For a story about a band I was actually wanting more music. The songs serve the material well in describing the emotions of the piece. But in between them the book could get a bit more of a lift even if there was some simple underscoring. After all, if music is their lives, why not make it all pervasive throughout the piece.

They've assembled a great cast has to tell the story. They not only look great but have some terrific vocals. As the slightly mysterious Lauren, co-creator Tori Allen-Martin is mysterious as the tentative ex-girlfriend.

Edd Campbell Bird as the teenage Michael (and his voice throughout most of the piece) is the optimistic boy looking to the future. David Leopold plays the withdrawn Michael full of despair.

The staging is simple yet effective. At points when the action shifts to Michaels room you don't get the sense of the despair that the story suggests. It is a bit hard to depict writing on the walls when there are none. And I was also distracted by the glowing triangle on the back wall. It gave the venue the feeling as if you had stepped into a meeting of some unusual Southwark cult. 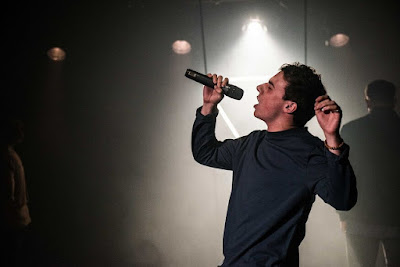 Music stars losing their mothers seemed particularly topical having seen this show the week Louis Tomlinson lost his mother. This is a show that doesn't need to be topical but could do with an audience. And perhaps a trim to under two hours to keep the momentum.

Directed by Jamie Jackson, Muted is playing at The Bunker until 7 January. Book by Sarah Henley and music and lyrics by Tim Prottey-Jones and Tori Allen-Martin. One of the novelties about this new venue under the Menier Chocolate Factory is that you can leave mini-reviews on the walls of the bathroom. So many were praising "that muted guy"... He does have something...