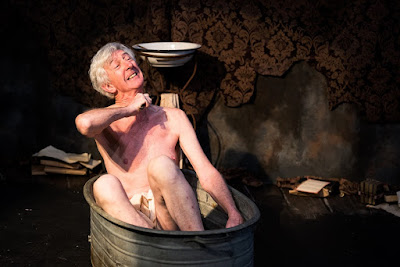 No matter how stylish you might be in your heyday, in the end you'll end up a bit daft and alone in a bathtub. That seems to be the central message in Beau Brummell, an Elegant Madness. It's currently playing at Jermyn Street Theatre.

The man famous for creating an understated mens style - dark coats, full length trousers, white shirts, cravats - is now living in dubious quarters in Calais. He switches between dreaming of making up with his old friend the Prince of Wales (now George IV) and contemplating suicide.

The play opens with Brummell (Seán Brosnan) in a bathtub about to cut his throat. Or at least threatening to do so. His vallet (Richard Latham) rushes in and manages to take the blade away from him. But his long suffering valet is not quite suffering as you would expect. And so beings this two hander that is part history lesson about the man and a reflection of the times. 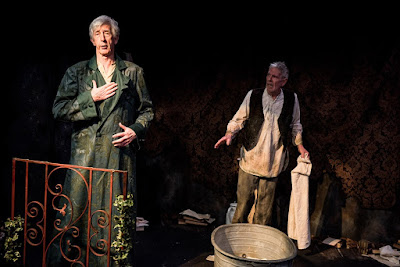 I was hoping for the banter to move up a notch a bit and take things a bit darker. Afterall, Brummell was confined to a madhouse riddled with syphilis by the time he died at the age of 61. But the piece feels a bit more like Waiting For Godot in the Georgian-era.

Still what keeps things engaging are the eccentric performances from Brosnan and Latham. Their banter and revelling in both squalor and the finer details of a shirt or coat makes the piece enjoyable. And you will be tempted to look up the history of the man later.

The ritual of dressing can still be a religious experience. Even if the cloth is riddled with stains. Perhaps that is the point of a cravat and waist coat.

Directed by Peter Craze and written by Ron Hutchinson, Beau Brummell - An Elegant Madness runs at Jermyn Street Theatre until 11 March. Do wear your finest. Even if it is in need of a clean. 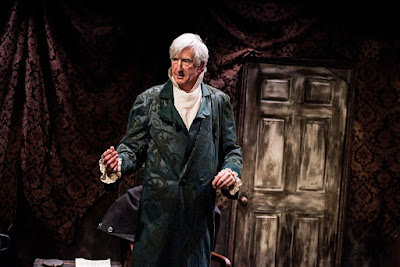