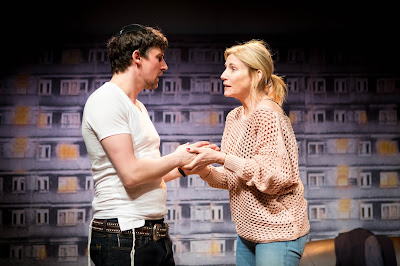 No matter what your religious or cultural background, all you need is a warm hearted older woman to perk you up. And chewable painkillers. And tea in a paper cup. These are all important in A Dark Night in Dalston which is currently playing at Park Theatre.

In the piece Council estate resident Gina brings in a young devout Jewish man lying outside her flat for a plaster and hot cup of tea. Some of the lads on the estate roughed him up after he was visiting the local slapper.  It wasn't so much as anti-Semitism as robust local banter.

Anyway while she is tending to his cuts and bruises and offering him tea the sun sets. And so he can't go home as it's the sabbath.  He doesn't want to face his father and he doesn't want to face his fiancee. Gina is an ex-nurse and full-time carer. But what care does young Gideon need? What draws him to Dalston in the first place since he comes from Stanmore? Couldn't he find what he was after in Kilburn? 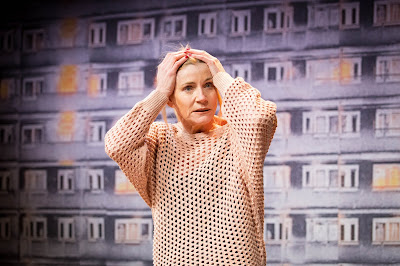 Many of these questions remain unanswered throughout the piece, even if Michelle Collins and Joe Coen are engaging in their banter and give the piece much of its sexual tension.

Stewart Permutt's script is also full of laugh out loud moments. But as the piece goes on it becomes less plausible. The Dalston in this piece doesn't feel like the gentrifying piece of inner London it is. Perhaps the hipsters, the bankers and thriving arts scene of the area inhibit another parallel Dalston.

At its current length it feels like there are several endings to the story. If there was only one it would have more edge.

Directed by Tim Stark, A Dark Night in Dalston is at Park Theatre until 1 April. Check the website for available dates as the show is close to selling out. 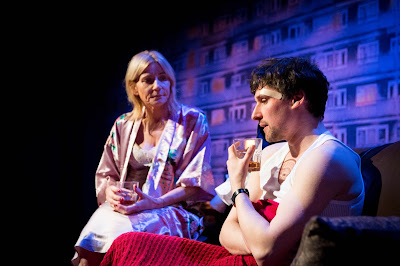