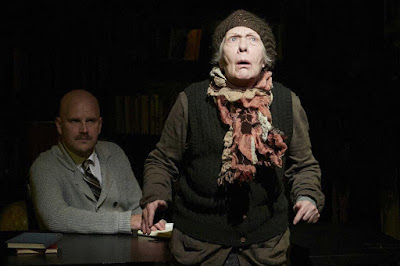 Just what would happen if a nearly two-hundred year old tortoise stood up and started walking around.  Bearing witness to the great events and catastrophe's of the twentieth century?

Well naturally she would want an historian to recount it all. Or at least correct what he had already written.

And thus is the central premise of Darwin's Tortoise by Juan Mayorga, with an English translation by David Johnson. It's currently playing at the Cervantes Theatre.


An old woman (Gilly Daniels) one evening appears at the home of a history professor (Philip Nightingale). She claims to be the tortoise Charles Darwin took from the Galapagos Islands and had evolved into something else.

She has a unique story to tell. Her experiences of living through Europe in the twentieth century. The odd saucy encounters with men. And has a thrilling message to tell us all over some birthday cake.

Daniel's performance as the full-evolved tortoise is a delight and part of the fun of this piece as historian and medical doctor clash over which science she is better contributing to.  It's at times unbelievably absurd but always enjoyable in this smart looking production directed by Paula Paz.

This is a fascinating new production from The Cervantes Theatre, which opened late last year. The theatre is part of the Spanish Theatre Company, which aims to bring Spanish and Latin American theatre to London.

It probably doesn't help to think too much about the story. After all, the real Darwin's Tortoise  saw out most of her life in Australia, seeing off her remaining years at Steve Irwin's zoo on the Sunshine Coast. If she had evolved to stand on her back legs you would expect she would be wrestling crocodiles and screaming "Crikey!"