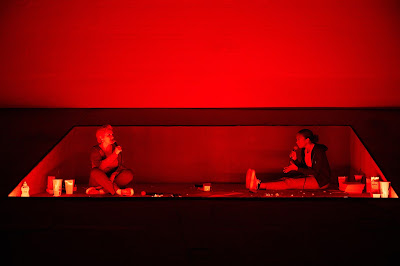 It's bad enough walking about the back streets of Hackney alone on a quiet mid-week evening without having to worry about a man with a gun. But after seeing Big Guns at The Yard Theatre that's all I was thinking about.

The man with a gun features a lot in writer Nina Segal's piece. It's part fear and part celebration of a culture of violence. Actually it is mostly fear. With a backdrop of pop culture references, pornography, terrorism, milkshakes and popcorn.

It's all topical as the banter moves between one violent act and the next. It is a two hander and opens with Two (Debra Baker) and One (Jessy Romeo) sitting in what could be a cinema. Wearing 3D glasses and stuffing their faces with popcorn. 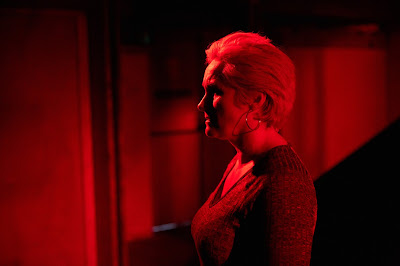 But as the piece progresses the fear sets in. You can smell it (along with what appears to be wafting into the audience from the rubbery set). Words and scenes are pelted at you with such vigour you cannot escape. From the trolling of a video blogger to random acts of violence passed off as terrorist atrocities.

Eventually the repetition of fear and loathing starts to impact. But perhaps not as always intended. But there is no time to dwell too much here as the piece moves quick.

And the man with a gun will linger in your mind. If only to ponder that it seems quaint to fear something that is so scarce in this country. I'd like to see a piece about fearing the man with the rental car from Birmingham. That's a little bit closer to reality.

Directed by Dan Hutton, Big Guns is at The Yard until 8 April. 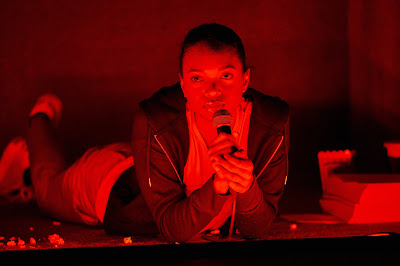