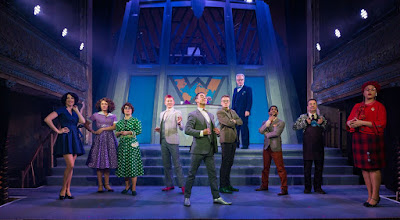 It feels a little like a high school musical with its clunky sets and actors cast in roles too old for them. But I still found How To Succeed in Business Without Really Trying at Wiltons Music Hall a lot of fun. Part of its fun is the memorable performance by Marc Pickering as the ambitious young executive.

Here you get the impression he is relying less on boyish charm and more on being sly and cunning to get ahead. Given the space of Wiltons he can look you in the eye and let you know he is out to get what he wants.  He also gives the classic songs in the show a fresh interpretation that feels as if they should be on an album. 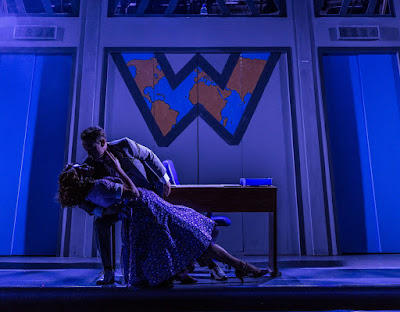 It's tempting to dismiss the show about lustful executives and secretaries out to nab a man as sexist and dated. But the book by Abe Burrows, Jack Weinstock and Willie Gilbert with music and lyrics by Frank Loesser doesn't take the period too  seriously. It is constantly poking fun of the early sixties life it is depicting.

As love interest and wily secretary Rosemary, Hannah Grover is sweet. Maisey Bawden, who wowed Palladium audiences getting "fricky fricky" in Honeymoon in Vegas last month shows spunk in her roles. Gerri Allen who gets the comic timing and mood of the show right as the streetwise secretary, Smitty.

The band under the musical direction of Ben Ferguson also sounded terrific.

It also helps after its "been a long day" to sit down and enjoy a show like this for its pure escapism. It's more fun than the Robert Morse film only because all the numbers remain in it (for better or worse). Only the lugging of furniture across the set... Or some of the attempts to choreograph big numbers with a small cast... Bring things crashing down to reality.

Directed by Benji Sperring, How to Succeed in Business Without Really Trying is at Wiltons Music Hall until 22 April. 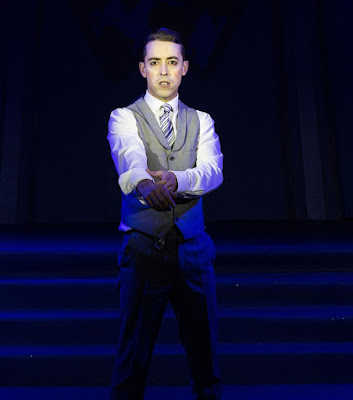