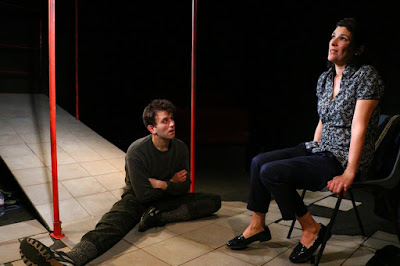 No doubt there are days when teachers just wish they had a baseball bat to put a little bit of distance between themselves and their students.

In Jam by Matt Parvin, teacher Bella Soroush is lucky enough to do just that. It's currently playing at the Finborough Theatre.

The premise in this two-hander is that ex-pupil Kane ruined Bella Soroush's life. Something happened and so she moved schools, moved towns and got on with her life. But now Kane has tracked her down and claims they have unfinished business. 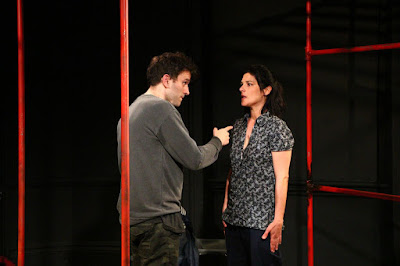 With all this potential for malevolence, you never get a sense of any real peril facing either character.  An uneasy soundtrack underscores the proceedings, but as the piece wears on it's hard to understand where the drama is.

One of Kane's past atrocities amounted to bringing a smelly cheese board to school. And Bella doesn't like smelly cheese. At this point you could be forgiven for thinking Bella is a touch neurotic.

There isn't much time to explore why British school standards lag behind many other developed countries. Nor does it equip the nation for the skills it needs given its heavy reliance on immigrants (at least for now). Perhaps the answer lies in the pointless discussions that take place here.

But even if the story doesn't add up to much Jasmine Hyde as Bella and Harry Melling as Kane are terrific to watch.

Melling's Kane is a bit of a man-child. Alternating between stand over man and schoolboy, you get the sense he realises the best years of his life (being at school causing trouble) are behind him.

Hyde is a revelation as she shifts from being a victim to being yet another teacher with dubious motives for entering the profession.

Directed by Tommo Fowler, Jam is at Finborough Theatre until 17 June. 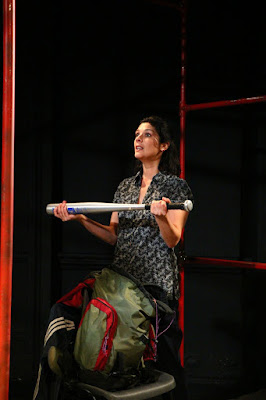