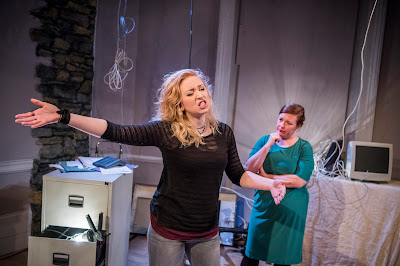 If a playwright ever wants to get the undivided attention of the audience, opening with: "Fuck you, you fucking bitch, I'll tear your fucking eyeballs out ya cunt!" sure does the trick.

And so begins an explosive 70 minutes of Everything Between Us by David Ireland. It's having it's English premiere playing in repertoire with Late Company at the Finborough Theatre. 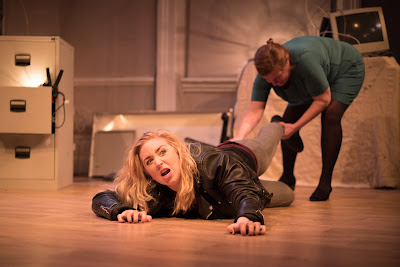 It's day one of the Truth and Reconciliation Commission for Northern Ireland at Stormount. Sandra (Lynsey-Anne Moffat) is taking her seat on the commission, when her long lost sister Teeni (Katrina McKeever) bursts into the chamber. She attacks the chairwoman, shouting racist abuse.

Her sister bundles her into a basement room away from security and this sets the scene for confrontations after an 11 year absence. The two pace the room sizing each other. It's like watching a boxing match, with each round notching up a level of tension.

We learn Teeni is a recovering alcoholic. And then we learn Sandra is an alcoholic too, who hasn't ever had a drink. Their father was murdered. But he also murdered. But as things escalate we get the sense that no matter what truths are revealed, there is no reconciliation.

McKeever is mesmerising as the angry and damaged  Teeni. She is hilarious. And offensive. Opposite her Moffat as the more successful sister shows equal bitterness and resolve.

Whether anyone can move forward with "everything between us" seems to be the central message. But it's a hell of a thought provoking ride anyway.

Directed by Neil Bull, Everything Between Us is at the Finborough Theatre on Sundays, Mondays and Tuesdays until 16 May. 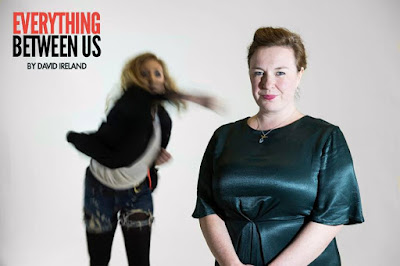