Life goes on: Footprints On The Moon @Finborough 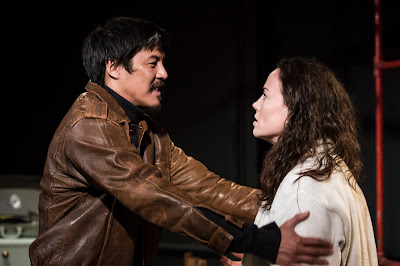 There's no place like home. Except when everyone around you wants to leave you and someone has scrawled your phone number on a wall of a dodgy bar. These are all important revelations in Footprints On The Moon.

Canadian playwright Maureen Hunter's story of life in a small town is having its European premiere at the Finborough Theatre.  With its well-defined characters it's a fascinating insight into small-town Canadian life. 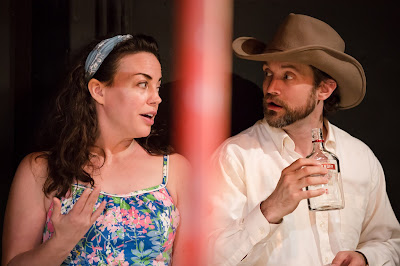 It opens with Joanie (Anne Adams) sweating in a dress waiting at the station for her daughter to arrive back home. But even after writing a prize-winning essay about how fabulous life is in her small town things aren't quite what they seem.

What becomes clear is that Joanie doesn't want anything to change and as her daughter grows up and wants to leave her world starts to fall apart. I

Sharing the abstract set with Jam (with is running alongside this production) makes the audience have to work hard to believe that we're in a remote province of Canada. But as a character driven piece, the performances make this exceptional.

Adams is terrific in this central role. She is veers between being provocative and vulnerable.

Sally Cheng as her daughter Carol Ann, is convincingly stubborn and argumentative. And when her ex, Boone, appears on the scene Nicholas Goh looms large as one of Joanie's biggest losses. 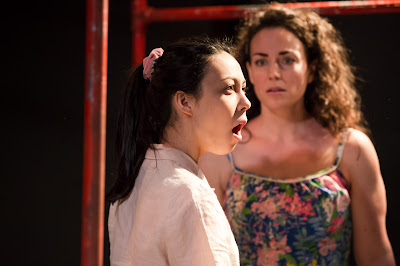 The other cast members fill out Joanie's world and capture the freedom and constraints of small-town living. Derek Hagen as Dunc is her friend with benefits and Samantha Coughlan is ex-schoolmate and drinking buddy Beryl.

The work was a finalist for Canada’s most prestigious literary award – the Governor General's Award. It also won the Labatt Award for Best Canadian Play. Hunter wrote the piece after meeting an ex schoolmate who had stayed in the small town they both grew up in and raised a family.

But unlike footprints on the moon, things change. Perhaps the treatment of loss and change makes the play feel a little dated, but it remains a fascinating character study.

Directed by Anastasia Osei-Kuffour, Footprints On The Moon in repertoire and on the set of Jam on Sundays through to Tuesday until 13 June.