The girl with the animal tattoo: Vixen @thevaultsuk 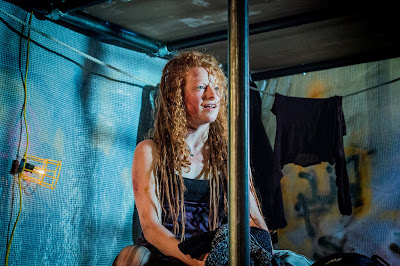 There's something about the girl with vixen tattoo in Vixen. If you're standing in the bar at the Vaults at the beginning she is likely to push you out of the way singing and asking for spare change.

It's a confronting introduction to this part promenade performance of Silent Opera's Vixen. It re-imagines Janáček’s The Cunning Little Vixen to the streets of London. Here Vixen is homeless, taken in by a different kind of predator only to escape.

Rosie Lomas in the role of the Vixen holds your attention with her performance of a determined and resourceful woman of the street.

Along the way she escapes a foster carer, kicks out another homeless man from his shelter and falls in love. 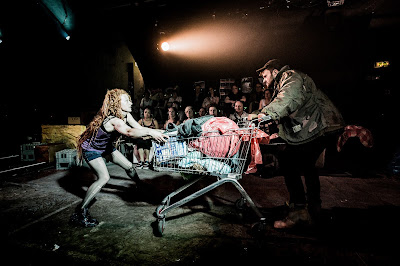 The adaptation has you moving through the spaces of The Vaults. With its dirty sofas, cramped spaces and an all-pervading smell of damp, the venue is well suited to the topic. It looks like a homeless shelter at the best of times. It's  evocative at least. The audience trundles throughout the space and so wear sensible shoes and clothing that's easy to wash.

Silent Opera has you watch the piece with headphones pumping the orchestra or electronic music. Perhaps the space of The Vaults doesn't quite make sense to do this. Popup Opera had managed to use the same space without such technical gimmicks.

It helps not to have an appreciation for Janáček’s The Cunning Little Vixen on which this piece is based. You get the impression that the subtlety, music and story is lost here. The translations come across as clunky. But as a story about the harsh realities facing the homeless, it's a thought-provoking (if slightly earnest) piece.

Directed by Daisy Evans, Vixen is at the The Vaults until 10 June. The production is also supporting the homeless charity Crisis so bring some spare change for their charity bucket. You also need to arrive early to receive your headphones and instructions. 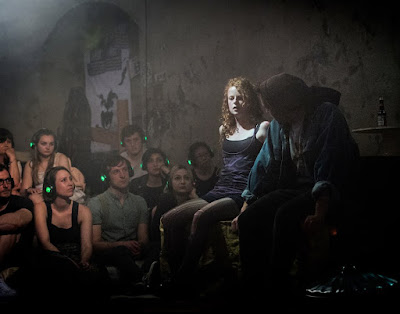