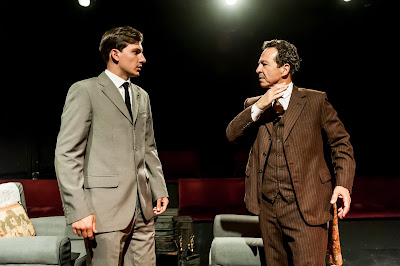 Poor Mr Gillie. A headmaster at a small village  school railing against the norms and expectations of the time. It's like a poor mans Dead Poets Society... Without the privileged young men, the cliches or the sentimentality. It's funny too which makes this piece enjoyable even if it is a little long. Here life is the pits, and Mr Gillie was the only hope for anyone who didn't care for that.

It's playing at the Finborough Theatre and is the first London production in over 60 years of James Bridie's work.

It opens with the a judge and barrister discussing the life of Mr Gillie. Mr Gillie and his wife had been evicted from their schoolmaster's house after the closing down of the school. The furniture van was coming to clear out his things but had run over and killed him. Now the  judge and barrister would have to decide whether his life had any point. 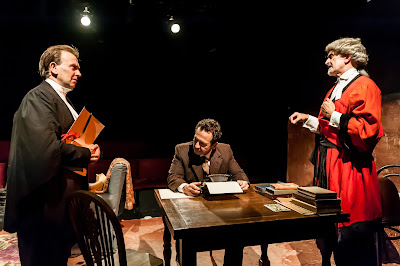 Mr Gillie was the headmaster of a village school in Scotland in 1950s. School was to prepare the young for either being a coal miner or the wife of one. Mr Gillie dared to offer tutoring on literature and philosophy to any student showing interest in it.

One of his proteges, Tom (Andrew Cazanave Pin), showed promise as a playwright rather than a pit worker. He's in love the daughter of the village doctor, Nelly (Caitlin Fielding). She wanted to be an actress. Taking up Mr Gillie's suggestion they elope to London.

The local education board was less than impressed by all this. So was the village doctor. But when the two return from London after six months away as vile party-goers it is Mr Gillie who turns out to be most upset. When he learns that Tom has become a critic for London paper he explodes with rage. That is too much of a waste of talent. 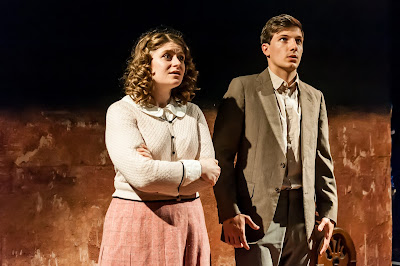 Holding the piece together is the performance by Andy Secombe as the stubbornly principled headmaster Mr Gillie. Alternating between being charitable and irritable, you're left guessing up to the final scenes what his motivation for this was.

The comedy moves a little slowly at times, but recreates the period well with its shades of browns. It also had me wondering what Mr Gillie would make of today's London... Particularly a theatre full of reviewers and bloggers and media relations types. Lucky he never lived to see all this.

Directed by Jenny Eastop, Mr Gillie is at the Finborough Theatre Sundays, Mondays and Tuesdays until 11 July.