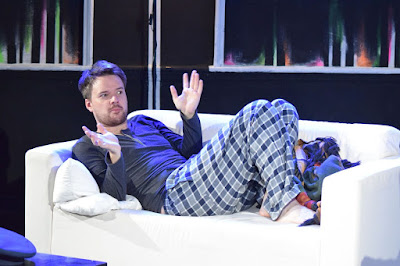 Sleep deprivation, angst and strange goings on in London are things we all can relate to. But Sheep, a dystopian take on London doesn't disturb or amuse in the end. It's more a tease. It's currently playing at the White Bear Theatre in Kennington.

The problem is that the central character Dexy hasn't slept for 21 nights. Played by Ciaran Lonsdale he looks too calm, clean and controlled to be believable in this dreamlike scenario. There's no bloodshot eyes, erratic behaviour or general wandering about looking like shit. Even for a comedy getting the mood right is important.

It opens with him complaining about the duck down pillow and brooding over his missing girlfriend. Soon he is visited by some strange men in his life. There is the overly camp Leo and the dull bus driver Vic. Then there is the mysterious lady Margot who likes to go out dancing. 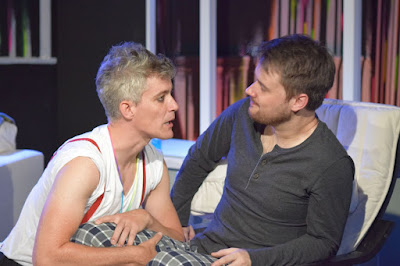 But missing guns, a city under siege and a hotel megalomaniac soon feature. It stretches the credibility and interest of the piece. Afterall, anyone staying in a London hotels would find it hard to believe a cartel of Europeans controlled them.

Night in the city was more effectively depicted in Run The Beast Down at the Finborough. In this show the narrator's increasingly erratic story pulled together a picture of deceit and desperation. Here it's either too literal or too obvious.

Still there's Sunny Smith's production to admire with its outlines and simplicity. Simplicity could have extended to the story and given it more laughs... And more edge.

Written by David Cantor and directed by Georgia Leanne Harris, Sheep is at the White Bear Theatre until 5 August.