Jam: Just To Get Married @Finborough 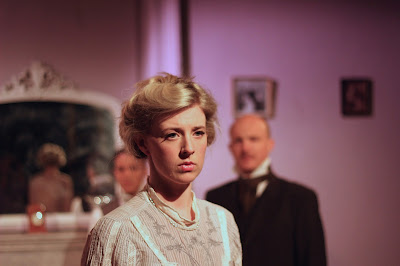 What's exciting about watching Cicely Hamilton's Just To Get Married is how it captures the spirit of a changing world. The piece is having its first London production in over 100 years at the Finborough Theatre.

It's lost none of its bite with its central argument that women are forced into marriage for their own survival. It's the only way they are judged as a success and they don't get the same opportunities as men.

It also captures life in Edwardian England where there was a fine line between living comfortably and just about managing. Here there is no safety net. No pensions. And if you're a woman, no right to vote either. Today, while some of the attitudes and priorities may have changed, some of the values may still seem familiar... 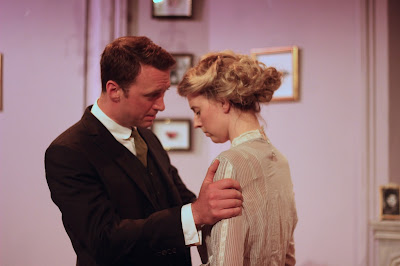 Hamilton presents us with Georgiana (Philippa Quinn). At 29 she's unmarried and living with her aunt and relatives. She feels she's a burden on everyone. And so when Adam (Jonny McPherson) arrives on the scene, everyone sees it as an opportunity to secure her future. The only problem is that he is very shy and she has no love for him. But surely that should not matter? Or should it?

The piece starts off as a light comedy as the attempts to get Adam to propose come to various awkward moments. But when Georgiana has second thoughts about the wedding given her ambivalence to Adam, things take a different turn.

Quinn is perfect as Georgiana. Sharp and witty, she recognises her limitations and is frustrated with her inability to go out on her own. McPherson as the shy Adam, captures his initial nervousness and transition to a man infatuated. 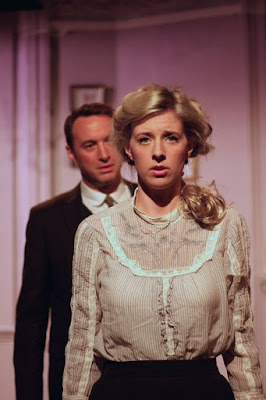 The rest of the cast serve the material well too. It's a smart looking production designed by Katharine Davies Herbst. Lottie Smith's costumes underscore Georgiana's attempts to pull out all the stops to get Adam's attention, particularly with that dress in the first act which seems to have the right mix of Edwardian glamour and desperation.

Even if the piece concludes a little too neatly, it remains both provocative and a delight to watch.

Directed by Melissa Dunne, Just To Get Married is at the Finborough Theatre until 19 August.