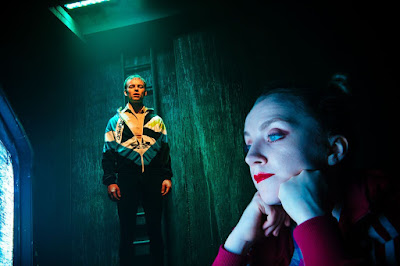 Twenty years on, Enda Walsh's Disco Pigs still manages to shock and fascinate with its evocative and provocative world of deprivation. It's currently playing at Trafalgar Studios.

But with its endless slang and two unpleasant characters, it's often an an impenetrable world. Even with two masterful performances and slick production values, this is still a journey through hell.

The piece is about Pig and Runt. Born on the same day and at the same time in the same hospital, they've been inseparable all their lives. They have their own language, own rules, and exist in a world of petty crime, violence, drinking and dancing...

But as they approach adulthood, Pig's feelings for Runt grow. Runt struggles to break away from Pig's advances and the world in which they have built over their lives. 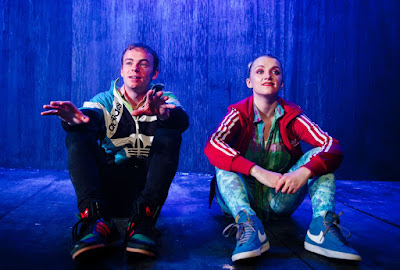 The energy of the performances is astonishing and keeps the momentum of this piece. Colin Campbell as Pig is edgy and  threatening. Evanna Lynch as Runt is also threatening. But she also conveys the tentative aspirations for a different life. At times the two seem to bounce off each other, even if you can't understand a word either of them are saying.

There isn't a glossary in the programme to help you out. You just have to feel your way through the emotions, movement and feelings.

When things start getting complicated, there's a throbbing soundtrack of classic dance tracks and Elliot Grigg's lighting to transform the space into a rave.

But these thrills feel like a clever attempt to skirt around providing any context to the gratuitous violence and depravity. And that makes it hard to care about either of them in the end.

Directed by John Haider, Disco Pigs is at Trafalgar Studios until 19 August. 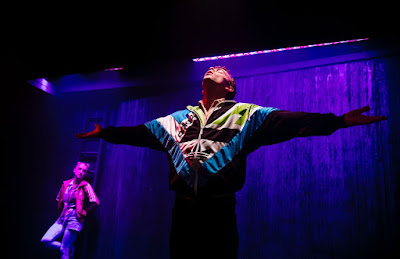