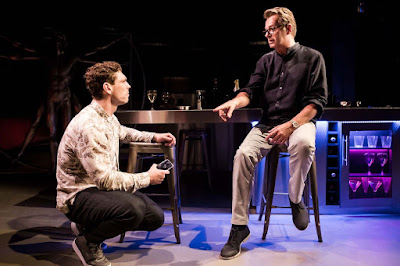 If you ever wondered what eating a light dinner might be like at Julian Clary’s place, Le Grand Mort at Trafalgar Studios gives you an idea.

It's a meticulous affair. Everything is stainless steel in Justin Nardella’s sterile kitchen set. As you would imagine a gay man might do to a Notting Hill flat. Food is already prepped and portioned into little bowls or packets. And any spillage is sprayed and wiped up. Based on Clary’s public persona you could assume it is him, even if his character's called Michael.

And  while the show and the food may not be to everyone’s taste, it's amusing and disturbing enough to keep you fascinated. 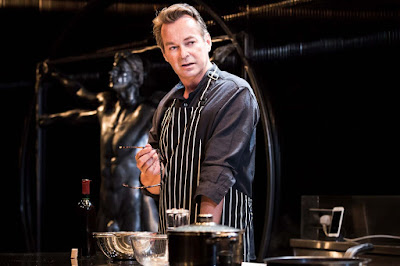 The piece opens with Clary, or rather Michael describing various instances where the human body is useful after death. It’s evocative of his comic monologues. Both shocking and amusing. But in the intimate downstairs studio space of Trafalgar Studios you find yourself both watching and being watched by him.

Both parties seem vulnerable. Clary even at times appears nervous. All this talk about death is a reminder that the wild hedonistic days  are behind us. And what we want more than anything else is a night in with bit of pasta and glass of wine on clean plates. And someone to eat with...

And so in walks Tim (James Nelson-Joyce), cocky and cock sure. With a muscular body and wearing jeans that could be painted on him so you just know at some point that muscular physique is going to be thrown in your face. A series of mind games then begin. 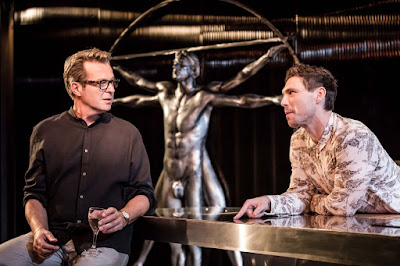 Stephen Clark, who died last year, wrote the piece with Clary in mind. Clary is impressive as this ageing yet successful lonely gay man. He manages to wring humour out of the most mundane cooking ingredients. Nelson-Joyce is more than his equal in stage presence.

One one level it's just a story about hookups, death and the clever use of large carving knives. But it’s ambiguous enough to ponder questions about death, celebrity and beefcake.

Researching the show I also discovered that Julian Clary blocked me from seeing his tweets. It turns out I responded to a tweet about his show back in 2013, which referenced Blue Nun wine and not sticking around after the interval. I didn't care for that show. But this one was more fun. And there’s no interval.

Directed by Christopher Renshaw, Le Grand Mort is at Trafalgar Studios until 28 October.